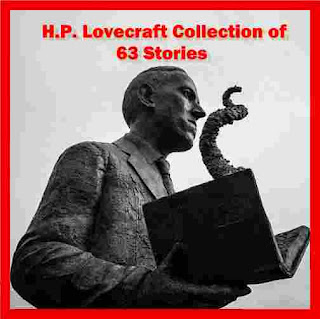 This collection of only public domain Stories  All stores were published before the end of  1935.
Howard Phillips Lovecraft (20 August 1890 – 15 March 1937) was an American author of fantasy, horror, and science fiction noted for combining these three genres within single narratives and most famous.
all stories without co-authors and all in the public domain. collected in one PDF file with Table of Contents
Lovecraft was interested in science from childhood, but lifelong poor health prevented him from attending college. He made his living as a ghostwriter and rewrite man and spent most of his life in seclusion and poverty. His fame as a writer increased after his death.
Favorite  Quotes by H. P. Lovecraft
“I couldn't live a week without a private library - indeed, I'd part with all my furniture and squat and sleep on the floor before I'd let go of the 1500 or so books I possess.”
― H. P. Lovecraft
“I know always that I am an outsider; a stranger in this century and among those who are still men.” ― H.P. Lovecraft,
“I never ask a man what his business is, for it never interests me. What I ask him about are his thoughts and dreams.” ― H.P. Lovecraft
“Creative minds are uneven, and the best of fabrics have their dull spots.” ― H.P. Lovecraft
Contents of the book :