Dickson's How to speak in public 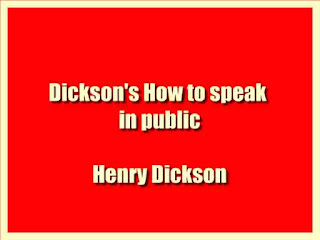 Oratory supplies the most sublime gratification which the gods have to give. to subdue the audience and blend mind with mind affords an intoxication beyond the ambrosia of Elysium. when Sophocles pictured the god mercury seizing upon the fairest daughter of earth and carrying her away through the realms of space, he had in mind the power of the orator, which through love lifts up humanity and sways men by a burst of feeling that brooks no resistance.
Oratory is the child of democracy: it pleads for the weak, for the many against the few, and no great speech was ever yet given save on behalf of mankind. the orator feels their joys, their sorrows, their hopes, their desires, their aspirations, their sufferings, their pains. they may have wandered far, but his arms are opened wide for their return. here alone does the soul respond to the soul. and it is love, alone, that fuses feeling so that all are of one mind and mood.
Oratory is an exercise of power. henry Dickson, founder and principal of the Dickson school of memory, is the author of a new book on oratory which is of interest to every man who wishes to understand the joy of this exercise of power. the name of professor Dickson's book is "how to speak in public." it contains valuable instruction by this famous memory expert. professor Dickson has done his work well and has shown a charming insight into the heart of his subject. the book is divided into chapters, which makes it easy to use, as you can turn to the subject which concerns you most, quickly. this book is designed to give practical instruction in tlie art of speaking before an audience. nearly every person is called upon occasionally to say a few works m public,
The book also contains
"If You Can Talk Well" by Dr Orison Swett Marden
Lecture on Memory delivered by Henry Dickson before the Metaphysical Society
Over One Thousand Topics for Orations, Speeches, Essays, Etc. Also Model Questions for Debate, Preparation
the book details : Download 14.5 MB