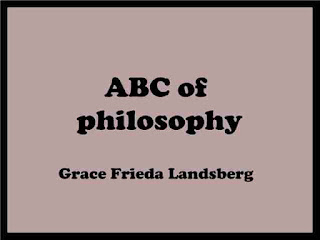 About three years ago, when I was read- ing or rather working through Goethe's Faust (it took me over six months), with my dear friend and teacher Fraulein A. Goetze, I found that I could not appreciate and understand half of what I read, owing to the fact that I knew nothing at all of Philosophy — I am mistaken when I say "nothing at all." I wish it had been so!
No, I had the usual erroneous ideas of a girl of sixteen educated under the modern system. Philosophy to me, meant Fatalism, and Atheism, — a wicked science certainly, and one likely to put its devotees into a most interesting frame of mind! Such a state of affairs could not last, however, as I was taking my literature very much "au serieux." I hunted accordingly for a book which would give me in a simple, clear, and concise manner, the elementary theories of Philosophy, but in vain, — the books I bought were not only miles beyond my comprehension, but the language used was so confusing that I as really worse off than before. Here again, my dear Goetze came. to my aid in giving me a few clear ideas on this subject, and it was these notes and hints that I took as the fundamental basis of my book when, three months ago, I decided to write it. So much for the origin!
Now for my purpose! I have written this book, not for scholars ( I could not presume that far, not being one myself) but for those who in some cases would be glad to, and in all cases should have some notions on so important a subject as Philosophy.
This is nothing more than a school book, a primer, or the A. B. C. of Philosophy. I have tried in the "Introductory Notes" to make all the different divisions and subdivisions, as clear as possible; and I think that the table will make the relative positions of the theories involved in them even more lucid. I have tried also to explain the differences and theories of the ancient and modern schools of Philosophy, and have named the individual philosophers and their principal teachings. T
his brings me to my second purpose, namely: a book of reference, limited, I grant, as I have not given Preface. xi all the philosophers but only the more im- portant ones, my prime object being to write a book for beginners. I do not claim to have accomplished my task as well as it might have been done by someone more fitted for this kind of work, but I have not for a moment forgotten either the trouble I had when I first ventured to peep into Philosophy, or my purpose of saving others of my own age the same perplexities. As I think I have attained my aim in that respect at least, I hope that my little book may fulfil its object.
a short history of philosophy for the general reader
the book details : Download