A study in moral problems 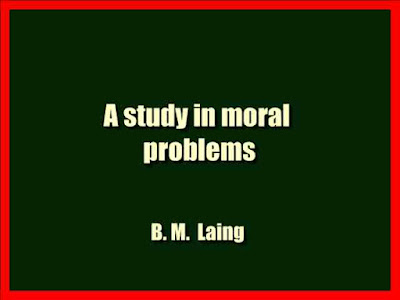 Excerpt from the introduction:
upon the nature of ethical theories and upon current moral judgments and exhortations, one cannot but be struck by the assumption or belief that underlies them all; and it is that social life is a huge burden that each must help to bear. Duties of various kinds devolve on each accordingly, but a considerable amount of mutual recrimination is not thereby avoided. Conflicts and quarrels become more marked and sharper; and human life tends to manifest, as a result of conditions, neurotic symptoms.
It is remarkable that no serious effort has been made to examine this assumption, to estimate its truth, and, if it is true, to find why it is or should be so. It is somewhat strange that mankind, in spite of all the knowledge gained and the discoveries made, should be bearing upon his shoulders a burden that no other type of animate existence has to bear. It is a tragic destiny for man if progress means an inevitable bearing of such a burden.
Sometimes it has been held that man cannot escape this burden; at other times it has been held that man can escape it, and an effort is made to find an explanation of it in the human will; man has proved himself unworthy of the achievements of science. Neither view need be accepted. The burden need not be regarded as inevitable, while the source of it need not be sought and will not be found in the human will.
Any attempt to find a solution to moral difficulties in the will is sure to be futile, for the will is too unintelligible an entity to be a basis for theory, and has hitherto been assigned a role in theory beyond its capacity to bear. For this reason, psychological solutions are largely illusory in connexion with all social problems; and this becomes still clearer when the relation between the so-called will, or rather a human action, on the one hand, and natural processes on the other is considered.

Throughout the following chapters there runs one central problem and upon it, all the arguments converge. It is the problem of the relationship between human action and natural law. It is an old one and one that has been dealt with by eminent thinkers: Kant and Lotze are but two. On account of the development of science with its insistence upon the reign of universal law, it has become in modern times a very important problem because of its bearing upon moral and social effort.
The freedom that is somehow implied in morality has to be reconciled with the rigidity and uniformity that characterize natural law. That problem must be and is here regarded as a fundamental one because it lies at the basis of all the more specific moral problems like evil, social conflicts, conflicts of values, the instability and uncertainty of moral progress and moral achievement; and because its solution will point a way to a solution of these difficulties.

A discussion of the general problem of the relation between freedom and mechanism or natural law tends accordingly to take the character of studies in morality, though at the same time it becomes quite clear that metaphysical questions arise and cannot be avoided, while yet within the present limits they cannot be very adequately discussed.

There arise questions about the structure of the universe and the nature of reality, as well as about the meaning of natural causality and natural conditions. Such questions demand full discussion, but at the moment that must be left aside, and only a reference can be made to certain points in these questions that are relevant to ethical studies, for they create difficulties as regards method. It has, for instance, been very generally held that the possibility of beginning with cause and of working up to purpose is extremely doubtful. The disparateness of natural cause and moral purpose, of natural law and moral law, renders such a procedure impossible.

There is an insuperable difficulty in effecting a transition from laws that describe how things and people do act to laws that prescribe how people should act. One type of law cannot be derived from the other. Ethics, in consequence, can never be purely inductive; and there remains a fundamental distinction between ethics and the inductive sciences.

the book details : Download A study in moral problems 6 MB