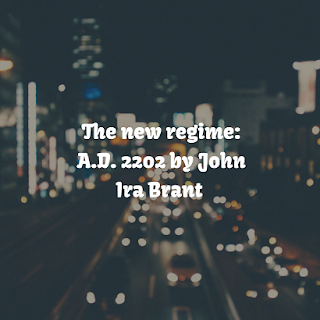 Excerpt:
It was a bitterly cold evening in March 2202 A. D. Mi. George Norman, in his apartment at New York, had just completed practicing on a 'cello and was seated by the hearth. Outside a storm was raging; now and then dense clouds of snow were dashed against the windows, while the trees creaked dismally. As he listened to the shrieking of the wind, the comfort which protection from the elements gave him was especially enjoyable. On the table, there was a small, unlabeled bottle containing a light-blue liquid. Upon noticing it, George's curiosity was aroused, for he could not recall having seen the bottle before. Carefully take off the cork, he smelled the contents, and, as the odor was nice, inhaled it several times. A moment thereafter his brain began to reel, then, staggering across the room, he fell onto the sofa, fainting. A few minutes later, when he had partly regained consciousness, there was a rap on the door. Mr. Carl Rivers came in, observed that something unusual had taken place, and inquired, "What's the matter, my boy?" "How did the stuff get here? Who's trying to drug me?" George exclaimed, and then told what had happened, adding, "In some ways, my mind is a blank now."