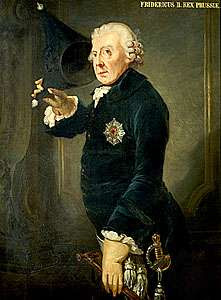 Frederick II, known as Frederick the Great, was Prussia's king from 1740 to 1786. By winning wars and expanding territories, he established Prussia as a strong military power.
THE origin of the gospel of inhumanity preached by von Bernhardi in his Germany and the Next War is to be found in the Confessions of Frederick the Great, which came into my hands accidentally a short time ago. The Rev. Graham McElroy, whom I met at a friend's house, who had noticed the resemblance, lent me an eighteenth-century duodecimo containing an English translation of the first five " Mornings" of the Confessions, which up till then were unknown to me. And about the same time, the editor of The Globe showed me the proof of an article which he had commissioned upon this book. It was a learned and intuitive paper, and a perusal of it and the book made me explore the subject at the British Museum. There I found the other two "Mornings," in another little eighteenth-century volume in their original French, and one of them, the highly important "Morning" which deals with Finance, had apparently never been translated into English on account of its banality.

The Confessions are translated from Les matinées royales (Les matinées du roi de Prusse), a work of uncertain authorship which has been attributed to Voltaire and to others. cf. Barbier, Dict. des ouvreges anon., and Quérard, Superch. litt