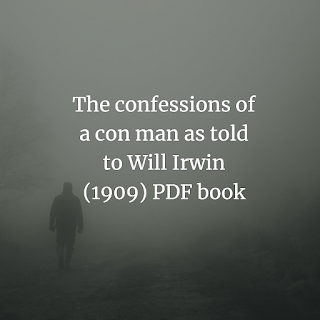 When these confessions appeared serially, friends and distant enquirers took it for granted that they were fiction; that I had stitched together, from the experiences of many grafters, the biography of a typical one. I hasten to assure the reader that this is a genuine confession; that I figure in it but as the transcriber of a life story told me I believe with every conscientious effort at truth during a month of pleasant association in New York. As a reporter, a little skilled in distinguishing the truth from the lie, I believed, when I wrote, in the sincerity of this story. Since then letters from his old companions of the road, who wished to be put into communication with him again, have confirmed detail after detail. I have disguised a name or a locality here and there; otherwise, I have set down only what he told me, trying through it all to give some flavor of the man and his vocabulary. The vocabulary is not the least interesting thing about that personality of mud-and-rainbows. Uneducated and unread, he has a keen perception of the value of words, and especially of those Latinate words which express an intellectual idea. He pounces upon a new phrase; he makes it his own upon the moment. I mention this, lest I be charged with dressing these plain tales of the highway in a vocabulary too pretentious for the subject or the man.