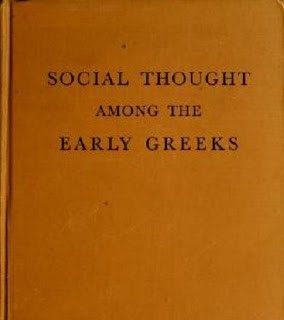 Few there are who realize how indebted we are to the Greeks for our civilization. Yet we have probably contributed to our cultural possessions less ourselves than we received from the Greeks. To know something of these fundamental contributions from around the Aegean, which saw the dawn of civilization, to the origin of our own culture is the mark of an educated person. The author has made the acquisition of this knowledge most attractive; for out of the treasure house of all that made the glory that was Greece, he has picked gems.

They are brilliant in the setting that he has given them, a setting of interpretation and history, made with sympathetic understand- ing. That the author is a sociologist, as well as a student of Greek thought, is not an accident, for thought and culture are social in origin. It was once thought that our ideas derived solely from our biological brain and that the Greeks were a people with more than their quota of inherited genius.

But whatever were the racial gifts of the Greeks, it is now recognized that any such expression of inherited abilities must be through the social milieu, which means long cultivation in the mores of the people. Science, literature, and philosophy, anywhere, are the outgrowth of the social life of the time. Hence the aptness of the title, "Social Thought Among the Early Greeks," and the appropriateness of a sociologist's making the correlations between social conditions and ideologies. It is also interesting to observe that this contribution to the understanding of Greek culture comes from a professor in a Southern university and that it is published by the University of Georgia Press, for it is my impression that the South and the Southern universities show relatively more evidence of appreciation and influence of classic antiquity than is found in any other section of the United States.

They resemble England and the English universities in this respect. We may hope that young men and young women in other parts of the United States, as well as in the South, will gain much from this book.