Rational philosophy in history and in the system: an introduction to a logical and metaphysical course 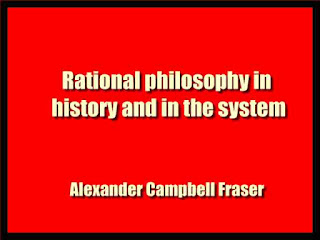 The Lecture read by me this winter, at the commencement of the Academical Course, is here expanded, in the form of a Tract on Philosophical Method, in which principles, then announced in a very general way, are more fully unfolded. A few references are also given to the literature of Philosophy. These are easily multiplied. Most of the books referred to are in the ordinary reading of a philosophical student.

They are here introduced to bring the reader immediately under influences, more fitted than any words of mine, to awaken the condition of mind in which the theme of this little work should be weighed. I was led to believe that the finger-posts which I have here tried to erect, on the confines of Rational or Intellectual Philosophy, might help one who is entering that region, in his search for answers to questions about the kind of study pursued there, it's the past and present condition, the aims, and contents of Logic and Metaphysics, as philosophical sciences, their internal relations, as well as their connexion with one another, with the intellectual history of man, and with an abatement of the error and ignorance by which that history is disfigured.

These are questions that arise in the mind of the considerate student, and to which, in the present confused state of logical and metaphysical literature in this country, it is not easy for him to find answers. I place this Tract, accordingly, within the reach of my own students, as a provisional substitute for a syllabus or outline of the Course which I am endeavouring to mature, in a region where maturity must belong sought for, and late in its appearance.

A view of Logic and Metaphysics, as the philosophical theory of Understanding and Belief in the mutual relation of their first principles, though not, as far as I am aware, hitherto stated and systematically unfolded, seems to bring into harmony some of the best current doctrines regarding these studies. It must be remembered, however, that answers to the questions which I have, in the last paragraph, supposed, far more full and satisfying than any I pretend to offer, if merely placed on paper, to be lodged in the memory, are no provision for the wants of a reflecting mind.
Philosophy cannot be taught or learned by rote. But something may perhaps be done, through a printed statement of this sort, to put or keep in motion, in the mind of a student, that train of meditative experiments, which is the essential part of a philosophical life. It is not in the design of this little work to bring much into light, either the proofs on which its doctrines rest of the consequences which may be deduced from them.
In the classroom, such premises and conclusions should gradually make their appearance, in co-operation with those who study there; and that co-operation is heartily given by a large number of the students of this University. In case these pages happen to fall under the eye of a philosophical reader, already matured, he is well able (if lit- should care, as an experiment, to occupy their point of view thoughtfully for a little time) to draw out for himself the reasoning that is latent in them, by which their teaching may be confirmed, or its errors made more apparent; and in the stores of his own reflection and learning, a reader of that class has more than enough of resources for testing the assumed premises.