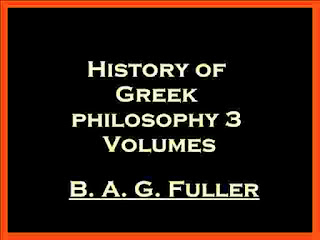 Excerpt from the author's preface in Volume one :

To add another to the numerous histories of Greek Philosophy available in English may seem uncalled for and imprudent, if not downright impertinent. The books already at hand are excellent, and, it would appear, sufficient.
The more detailed and critical are standard and exhaustive works of reference and of advanced instruction; the shorter and the more concise serve to aid and refresh the memory, or to give an accurate small scale map, easily readable to the practiced or interested eye.
But the fact remains that however invalu¬ able they may be to one already familiar with the subject, or born with a natural bent for it and therefore quick to under¬ stand its problems and tolerate its terminology, they prove too learned, too technical, or too bloodless and in the nature of a text-book, for the use and pleasure of the “general reader.”
They are apt to give merely the plan without the panorama which infuses it with color and shape and animation. Or else they confuse the untrained observer with the spectacle of the novelty, the wealth, the tropical luxuriance of a vast and incredible landscape teeming with the strange forms of a monstrous fauna and flora, in which everything familiar seems turned topsy-turvy. And in either case, they assume, deliberately or unconsciously, previous knowledge of philosophy, or an already awakened flair for philosophic imaginings and speculations such as shall prepare the reader to follow with sympathy and understanding minute and elaborate discussions, or at least enable him to make the often over-dry bones of rapid and highly condensed accounts live.
For example, many American university curricula are faced with the problem of acquainting, wholesale, and in the brief term of a semester^ large numbers of innocent and incurious youths with what every young man should know about the history of Greek Philosophy. And this problem, hard at the best, is, not a little aggravated, so far as my experience, which I fancy to be fairly typical, goes, by the difficulty of finding any book sufficiently untechnical and vivid to supplement the teacher’s lectures and arouse the understanding and the interest of his pupils.
Again, one is frequently not a little embarrassed and at a loss for an answer, when indiscreet friends among “the general public” come with a modest disclaimer of any knowl¬ edge of philosophy save a certainty that it is “beyond them,” and ask for the name of some work which may instruct them without too greatly straining their limited powers of comprehension.
In the present volume I have tried to meet this want so far as the early Greek philosophers are concerned, and to get underway with a simple, painless, and, I hope, not an unentertaining history of Greek Philosophy as a whole. I am encouraged to this attempt by my own feeling that philosophy is not really the impossibly abstract, abstruse, cold, and difficult thing of the popular imagination, but rather something essentially warm, close, nay, clinging to everyday life, highly colored, melodramatic, and naturally provocative and engrossing. And with this feeling goes the opinion that its history is the story of perhaps the most exciting and sensational pursuit with which the human mind has diverted as well as ennobled itself. If I shall have succeeded in insinuating that philosophy is not so dull and respectable after all, and in troubling the reader, however vaguely, with something of its fascination, I shall feel that I have done what—apart from amusing myself—I set out to do.
This volume is based upon other histories, and so far as I know, there is nothing original in it. The sources have been before me, but I have tried to rely entirely upon the interpretation of them given by such historians as, for instance, Zeller, Gomperz, and Professor Burnet. I do not see that at the present time anything new can be said, except by experts, and it has been my aim merely to rehash in a lighter and more easily digested form what they have already thrashed out and prepared.
Where divergencies of opinion and interpretation exist, they have been noted, but no side has been taken. Further¬ more, I have wished to be quite nonpartisan. Being devoid of any “system,” or even strong conviction—save, perhaps, that the growth of philosophic speculation, as well as the evolution of the Universe and the course of human events, is without culmination—my mental furniture lacks that Procrustean bed of a fixed point of rest and reference upon which the history of philosophy is sometimes stretched.
I have no child or even pet view of my own, for which to seek forerunners in the wilderness among the ancients. At the same time, it has not been my intention to take a severely objective and impartial attitude. I have sought rather be thoroughly partial to each new system, to imagine myself the disciple, not the critic, of the successive philosophers with whom I have dealt, to make all their ideas as plausible as I can, and in general to say as much good and as little ill as possible about everybody and every¬ thing.
Two bibliographies have been appended, dealing respectively with Greek Religion and Early Greek Philosophy, as well as a chronological table, which may be useful for framing philosophical, with their set of historical, events. The bibliographies make no pretense at being complete. They include only such books as I myself happen to have found useful, and betray if anything, the limitations of my library.

Benjamin Apthorp Gould Fuller was a philosopher, author of A History of Philosophy, and president of the American Philosophical Association. He is also known and published as B.A.G. Fuller. He was the son of Horace Williams Fuller and Emily Gorham Carter