The Science of Business: Being the Philosophy of Successful Human Activity 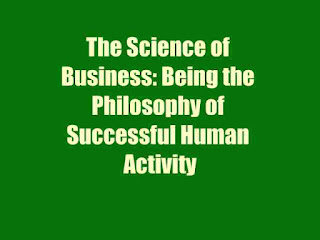 Being the philosophy of successful human activity functioning in business building or constructive salesmanship.

This book in three parts is concerned with the correct word, the choice word, the effective word. Part I is a review of grammar as the art of correct speaking and writing. Examples of commonly misused words are given, discussed, and the proper use indicated. Several parts of speech are defined and their use is illustrated. There is a shortlist of appropriate epithets, and a few apt phrases offered for the student's consideration as a help to the art of phrase-making, which is the foundation of sentence building.
It was not possible in so brief an outline to go into the subject of syntax further than to point out the kind of sentences that can be formed and to give their names. The student who has failed to receive thorough drilling in the analysis and synthesis of the sentence, or who has permitted his work in that direction to pass into the shadowy realm of forgetfulness, would do well to review the subject in some standard textbook.


The ordinary rules for capital letters and for punctuation, with a few useful rules for spelling, and the common marks used in the correction of printers* proofs are placed here for handy reference. Part II of this textbook is a review of Lesson Ten of "The Science of Business Building." It is a brief treatise on rhetoric or the art of persuasion. Part III is a revision of the textbook on logic, or the art of making sound judgments, and of uncovering the grounds and finding the causes of unsound or invalid judgments.
This subject is necessarily treated in a brief and sketchy manner. The interested student will find it profitable to read one or more standard works on logic, especially with reference to the detection of fallacies.