The melancholy of Stephen Allard - a private diary 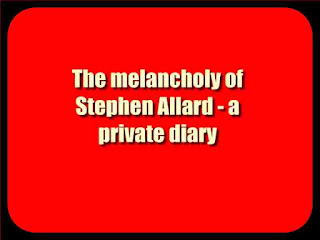 In publishing this private diary of a dead friend I transgress his manifest intention. My plea and I hope sufficient excuse must be the interest with which I have read it^ and with which, possibly^ others will read it. Lacking authority and special competency for the task.
I have restricted my functions as editor to their narrowest limits; I have merely divided the diary into parts and placed marginal summaries at the head of each section. I add no portrait of my friend drawn from my own recollections of his personality^ no critical essay ;
I do not presume to offer a clue towards the better comprehension of the book or to deduce a moral: Stephen
A Hard must speak for himself. I will only state that such of his acquaintances as I have consulted had little or no suspicion of his melancholy, and briefly account for the coming of the diary into my possession. I first became acquainted with Stephen Allard at Oxford. He was quiet ^ gentle^ reserved., more ready to make music than sustain a part in the conversation.
An indefatigable student., he was possibly too interested in subjects that lie outside the ordinary curriculum; his copious and varied learning was known barely, if at all. With the end of our University careers., our intercourse almost ceased. We were separated by distance., and he was not a frequent correspondent.
The letters I received from him were curiously impersonal; he pleasantly discussed matters suggested., but told little or nothing of his own fortunes. I could gather at most that he was in some very subordinate position and did not expect any change. He seemed to have become more retiring than ever, but 1 judged him versatile^ and ample company to himself. About four years ago., after a brief visit to the South Coast, he enclosed in a letter some little lyrics which caused me to ask for more of the kind, and from time to time during the space of a year or so he sent me fresh instalments, but never spoke of them in the accompanying letters, though I endeavoured to make him break his silence by critical praise and censure. I now discover in these lyrics the first slender draught, as it were, of the present diary.
A year and a half ago he surprised me by the information that he was going to live in Devonshire for a year ^ and that he was able to do so without detriment to his fortunes. During eight months I received occasional letters from him containing agreeable descriptions of scenery and kindly inquiries. But there came a letter from the farm at which he was staying with news that my friend was dangerously ill. I was his sole correspondent would seem, and they had made out my address from my last letter. I arrived only to find that pneumonia had proved fatal in a few days. In his writing-desk, I discovered this diary and a small sum of money., which sufficed to defray the unhappy expenses and to reward in some measure the kindly people whose care seemed to have been all that could be desired., and whose expressions of sorrow were most affecting.
After inquiry., I handed over his effects to some distant relatives., and was allowed to retain his desk., the diary it contained^ and the hooks he had brought with him. Finally^ I could wish that he should not be judged by a single phrase., or paragraph., or section. Though the method of its composition necessarily precluded anything like an organic evolution^ this diary is still an orderly whole., not a collection of separate., chance entries; the same questions recur again and again ^ in different forms., the sections reach backwards and forwards presupposing in a manner all that pre- cedes^ heralding all that succeeds.
He is examining the causes and the possible remedies of his melancholy. and censure, if it must he censure^, should at least be based on a careful and complete study and inter-comparison of the whole diary. He is his own critic lucid  eselexaminers^he '' discovers and applies to himself all the charges that other men are like to bring against him "; he *' amply scorns " himself. Perchance the reader will agree that he is not to be altogether scorned.
It may even he that the *' weaker hrethren^' instead of deploring the publication of such a hook^ should rather find in its very negations new ground for simple faith; while, on the other hand, those who deem themselves strong should possibly find cause to distrust their presumed strength. But I seem to see Stephen Allard preparing to criticise this last sentence of mine^ and reminding me that I am in the way of infringing my declared intention to abstain from comment.
the book details : Download 11.7 MB