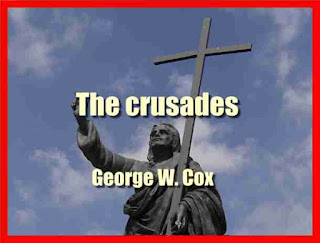 The Crusades were a series of wars, waged by men who wore on their garments the badge of the Cross as a pledge binding them to rescue the Holy Land and the Sepulchre of Christ from the grasp of crusades— the unbeliever. The dream of such an enter- popular wars.
prise had long floated before the minds of keen-sighted popes and passionate enthusiasts: it was realized for the first time when, after listening to the burning eloquence of Urban II.

the Middle Pope Alexander II. he gathered, indeed, a motley host of adventurers; but the religious enthusiasm by which these may have fancied themselves to be animated had reference chiefly to the broad acres to which they looked forward as their recompense.
The great gulf which separated such an undertaking from the crusade of the hermit Peter lay in the conviction, deep even to fanaticism, that the wearers of the Cross had before them an enterprise in which failure, disaster, and death were not less blessed, not fewer objects of envy and longing than the most brilliant conquests and the most splendid triumphs.
They were hastening to the land where their Divine Master had descended from his throne in heaven to take on Himself the form of man — where for years the everlasting Son of the Almighty Father had patiently toiled, healing the sick, comforting the afflicted, and raising the dead, until at length He carried his own Cross up the height of Calvary, and has offered up his perfect sacrifice, put off the garments of his humiliation when the earthquake shattered

the prison-house of his sepulchre, For them the whole land had been rendered holy by the tread of his sacred feet: and the pilgrim who had traced the scenes of his life from his cradle at Bethlehem to the spot of his ascent from Olivet might sing the Nunc dimittis, as having with his own eyes seen the divine salvation.

The crusades a series of popular wars.
The distinction between the crusades and other wars of the Middle Ages
Absence of local feeling in the earliest Christian traditions .......
The Christianity of St. Paul...
The Christianity of the Roman empire.
The localism of heathen religions.
Influence of these local religions on Christianity
Growth of local associations in Palestine
Growth of pilgrimage to the holy places of Palestine
The gradual decay of spiritual religion
The encouragement given to pilgrimages
Trade-in relics
The stimulus given by pilgrimages to commerce with The East ..
The long struggle between Rome and Persia.
611 Capture of Jerusalem by the Persian king Khosru II
Persian invasion of Egypt...
622-625 Campaigns of the emperor Heraclius
627 Battle of Nineveh ......
628 Restoration of the True Cross by the Persians
629 Pilgrimage of Heraclius to Jerusalem.
637 Conquest of Palestine by Omar
Terms of the treaty made by Omar with the Chris
tians of Jerusalem .....
Omar and the patriarch Sophronios
Effects of Arabian conquest on pilgrimage to Jerusalem
1096 Departure of the first rabble of crusaders under
Peter the Hermit and Walter the Penniless. 39
Second rabble under Emico and Gotschalk . . 40
Bloody persecutions of the Jews . . . .40
The Jews were taken under the protection of the empire 41
March of Walter and his followers through Hungary and Bulgaria
Passage of the pilgrims across the Bosporos
Their utter destruction by Kilidje Arslan.
Rank and character of the leaders of the first crusade
Godfrey of Bouillon and his brothers Baldwin and Eustace
Hugh of Vermandois
Robert of Normandy
Robert of Flanders, and Steph
Adhemar, bishop of Puy
Raymond of Toulouse
Bohemond
Tancred.
Cause and effect of chivalry
Knighthood Courtesy.
August Departure of the main army of the crusaders under Godfrey .......
1235 Siege of Constantinople by Vataces . . . 179
1237-1261 Baldwin II., emperor of Constantinople . . 179
Efforts to raise money ...... 179
Sale of relics 179
1255 Death of Vataces 180
1259 The envoys of Baldwin repelled by Michael Paleologos 180
1261 Recovery of Constantinople by the Greeks . . 181
July Permanent alienation of the East from the West. 181
the book details : Download 9.8 MB