The case for miracle 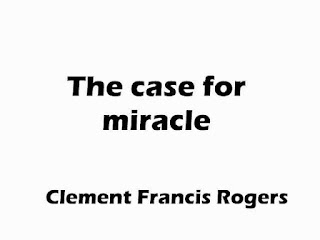 Clement Francis Rogers was an English theologian, who was a professor of pastoral theology
In this book, he tries to rationalise the miracle defending his Christian faith.
I have given the following lectures on Miracles some eight times in Hyde Park, eleven times to students at King's College, and on other occasions elsewhere. I have here written them out from the actual notes I used then, adding more detail for readers but not altering the outline. For in writing you can say more. Readers can stop to think.
They can read a sentence again for themselves and do not want repetition in the text. Nor do men want, either in hearing or reading, to be bothered with references or to be distracted with too many quotations. But in open-air speaking, you can be challenged and heckled as to your authority for what you say.
I have added, therefore, in the notes at the foot of the page, references to justify what I say in the text, quotations to show what people say whose opinion is better worth having than mine, and, in most cases, though not in all, to suggest good books to read. I have tried to say nothing in the text that the ordinary educated man cannot understand, while in the notes I suggest matter rather for scholars and specialists. The four chapters, therefore, can be had separately in the S.P.C.K.'s series of Little Books on Religion, and used for discussion in classes or put on sale in racks for tracts in churches, while I hope students and preachers may care to have the indexed book on their shelves.
The lesson I have learned by lecturing on Christian Evidence in the open air is that the mass of men have very little idea of what Christianity is and that we have largely failed to " get our message over " and make our creed understood.
the book details : Download The case for a miracle