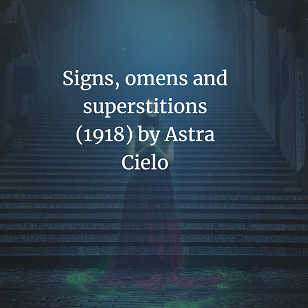 Man has ever found it difficult to understand the mysteries surrounding him on all sides, and groping in the dark he has tried by prayer, incantation, or peculiar practices to force nature to do his bidding.

Superstition, therefore, arises primarily from ignorance. Early man believed that every phenomenon of nature was the work of a spirit or devil. His intelligence could not suggest any other explanation. To this belief was added fear. The thunder, the lightning, the earthquake, darkness — all filled him with fearful dread. To him, they were the workings of spiteful powers to be propitiated. Where ignorance and fear are surrounded by the danger they will always grope for a way of escape. Thus superstition is born. A belief in the existence of spirits antagonistic to man gave rise to most of the old superstitions.
It is an interesting question as to how the many superstitious beliefs and practices had their beginning. The origin of most of them is no doubt to be found in man's efforts to explain the phenomena of nature, and in an attempt to propitiate an angry deity and to invite a better fortune. From these sources come many of the absurd notions still in vogue among primitive people, which have been handed down in modified form to us.