My adventures with your money 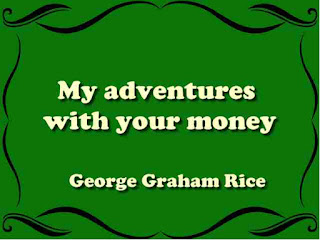 You are a member of a race of gamblers. the instinct to speculate dominates you. you feel that you simply must take a chance. you can't win, yet you are going to speculate and to continue to speculate and to lose. lotteries, faro, roulette, and horse-race betting being illegal, you play the stock game. in the stock game, the cards (quotations or market fluctuations) are shuffled and riffled and stacked behind your back after the dealer (the manipulator) knows on what side you have placed your bet, and you haven't got a chance.
When you and your brother gamblers are long of stocks in thinly margined accounts with brokers, the market is manipulated down, and when you are short of them, the prices are manipulated up. you are on guard against the get-rich-quick man, and you flatter yourself that you can detect his wiles at a glance. you can one kind of get-rich-quick operator. but not the dangerous kind. modern get-rich-quick finance is insidious and unfrenzied. it is practised by the highest, and you are probably one of its easy victims. one class of get-rich-quick operators uses crude methods, has little standing in the community, operates with comparatively small capital, and caters to those who do not think and have only small resources. he is not particularly dangerous.
The other uses scientific methods so scientific, indeed, that only men " on the inside " readily recognize them; occupies a pedestal in the community; is generally a man of excellent financial standing, a member of a stock exchange; employs large capital; appeals to thinkers or those who flatter themselves that they know the difference between a gold bar and a gold brick, and seeks to separate from their money all classes and conditions of men and women with accumulations large or small. the united states government during the past few years, at the behest of the big fellow, who seeks a monopoly of the game, has been raiding the little fellow the crude operator whose power to injure is as nothing compared to the ravages that have been wrought by the activities of his really formidable prototype.
I have a message to communicate to every investor and speculator, a story to tell of my experience through the great goldfield, bullfrog, manhattan and Greenwater mining booms in Nevada of 1905-1908, in which the public lost upwards of $200,000,000, and of a series of great mining-stock promotions in wall street and other American financial centres, in which the public sank $350,000,- 000 in 1910. the narration of the facts demonstrates that the government's get-rich-quick crusade has made it less easy for some of the small offenders to thrive, but that the transcendentally greater culprits are at this very moment plucking the public to a fare-you-well, and that the government has not lifted a finger against them.
No man, except a common thief, ever started out to promote a mining company or any other company that he was convinced at the outset had no merit; and the work of common thieves is quickly recognized and the offenders are easily apprehended. the more dangerous malefactors are the men in high places who take a good property, overcapitalize it, appraise its value at many times what it is worth, use artful publicity and market methods to beguile the thinking (public into believing the stock is worth par or more, and foist it on investors at a figure which robs them of great sums of money.
There are more than a million victims of this practice in the united states. after years of experience behind the scenes, the conclusion is forced upon me that the instinct to speculate is so strong in American men and women that they choose to " take a chance " regardless of the fact that at the outset they already half-realize they eventually must lose. myself, in boyhood, a victim of the instinct to speculate, i, years afterwards, at the age of 30, learned to cater to the insatiable desire in others.
I spent fortunes on advertising and wrote my own advertisements. I constructed on big lines powerful dollar-making machinery that succeeded in getting the money for my enterprises, and I was generally my own manager. ten years of hard work in a field in which I laboured day and night has dis- closed to me that the instinct to gamble is all-conquering among women as well as men the rich and the poor, the young and the old, the wise and the foolish, the successful and the unsuccessful. worse, if you have lost some of your hard-earned money in speculation, your case is undoubtedly incurable, because you have a fresh incentive, namely, to " get even." experience, therefore, will teach you nothing. the professional gambler's aphorism, " you can't kill a sucker," had its genesis in a recognition of this fact, and now stock promoters and manipulators of the multi-millionaire class subscribe to its truth and on it predicate their operations. nearly everybody speculates (gambles); few win.
Where does the money go that is lost? who gets it? are you aware that in catering to your instinct to " invest," methods to get you to part with your money are so artfully and deftly applied by the highest that they deceive you completely? could you imagine it to be a fact that in nearly all cases when you find you are ready to embark on given speculation, ways and means that are almost scientific in their insidiousness have been used upon you?
the book details : Download 15.3 MB