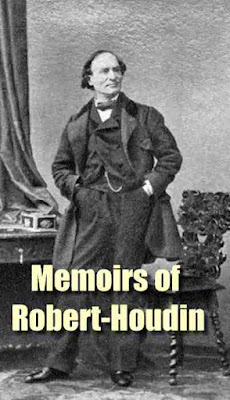 In my humble capacity of the translator of Robert- Houdin's life, I may be permitted to make one or two remarks, and answer in anticipation the objections which I feel confident will be raised. In the first place, I am perfectly well aware that this English copy of Houdini's book will strike many of my readers as even more Gallicised than the original; but I beg to assure them I have produced this impression from malice prepense. It would have been a very easy task for me to have made the book thoroughly English, but I feel, had I done so, it would have been as flat as yesterday's champagne.
The great merit of the book, to my mind, is the intense belief M. Houdin has in his mission, and though no Englishman would write of himself in such a satisfied tone, I am firmly convinced that the arch-conjurer is actuated by the same feelings which induced Vatel to fall on his sword because the fish did not arrive in time. Death before disgrace! is apparently Houdin's motto. Grant- ing this indulgence for his " brave words," I thought it much better to present him to my readers as a real Frenchman, and not to endeavour to array him in an English garb, in which he would have been a non-descript. An exception may be taken, also, to the attributes I have ascribed to him on my title page. But, a slight consideration will prove the justice of my choice.
That he is an author, almost a novelist, the Torrini episode will sufficiently prove; he was an ambassador most decidedly if success is any criterion of diplomacy; while his claim to the rank of conjurer will be granted by everyone who saw him and who did not? Most refreshing, too, is the way in which he writes of England and the English; and in his sincerity, he almost equals his countryman, who said, " I always speak the truth, and I must allow I have seen an Englishman who had not red hair." When we remember how many artistes, after making a fortune among us, have repaid us by insulting perfidious Albion, I feel sure that my readers will give his " Reminiscences" a hearty welcome, and not think the worse of him because he does homage to the prevalent failing of the true-blooded Frenchman. I dare say, after all, that many Englishmen are equally convinced of their own supreme talent, though they do not ex- press that opinion so naively as docs Robert-Houdin.

CHAPTER I.
My Birth and Parentage My Home The Lessons of Colonel Bernard Paternal Ambition My first Mechanical Attempts Had I but a Rat! A Prisoner's Industry The Abbe La- Riviere My Word of Honour Farewell to my darling Tools. 1
CHAPTER II.
A Country Idler Dr Carlosbach, Conjuror and Professor of Mystification The Sand-bag and the Stirrup Trick I turn Lawyer's Clerk and the Minutes appear to me very long A small Automaton A respectful Protest I mount a Step in the Office A Machine of Porter's Power The Acrobatic Ca- nariesMonsieur Roger's Remonstrances My Father decides that I shall follow my Bent. ..." . . . 11
CHAPTER III.
My Cousin Robert The most important Event in my Life How a Man becomes a Sorcerer My first Sleight-of-Hand Feat An utter Failure Practising the Eye and the Hand Curious Experiment in Prestidigitation Monsieur Noriet An Action more ingenious than delicate I am poisoned Influence of Delirium, 30
CHAPTER IV.
I return to Life A strange Doctor Torrini and Antonio: a Conjuror and a Fanatic for Music A Murderer's Confession A perambulating House The Fair at Angers A portable Theatre I witness for the First Time a Conjuring Performance The blind Man's Game at Piquet A dangerous Rival Signor Castelli eats a Man alive 46
CHAPTER V.
Antonio's Confessions How to gain Public Applause The Count de, Mountebank I repair an Automaton A Mechanician's Shop on Wheels Nomadic Life Happy Existence Torrini's Lessons His Opinions about Sleight of Hand A fashionable Greek, Victim of his own Swindling The Conjuror Comus A Duel at Piquet Torrini proclaimed Conqueror Revelations New Catastrophe Poor Torrini ! . 68
CHAPTER VI.
Torrini relates his Life Treachery of Chevalier Pinetti A Conjurer through Malice A Race between two Magicians Death of Pinetti Exhibits before Pius VII. The Cardinal's Chronometer Twelve Hundred Francs spent on a Trick Antonio and Antonia The most bitter of Mystifications Constan- tinople . . 89
CHAPTER VII.
Continuation of Torrini's History The Grand Turk orders a Performance A marvellous Trick A Page cut in two Pitying Protest of the Harem Agreeable Surprise Return to France Torrini's Son killed Madness Decay My first Performance An annoying Accident I return Home . . . 126
the book details : Download Volume 1