Language in action: a guide to accurate thinking, reading, and writing 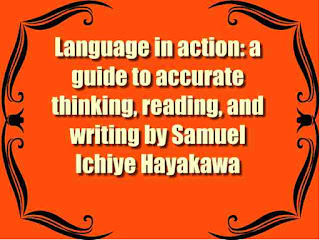 Samuel Ichiye Hayakawa (July 18, 1906 – February 27, 1992) was a Canadian-born American academic and politician of Japanese ancestry. A professor of English, he served as president of San Francisco State University and then as U.S. Senator from California from 1977 to 1983.

What this book hopes to do is to offer a general system for clearing the mind of harmful obstructions. It is an attempt to apply certain scientific and literary principles, or, as we may call them, semantic principles, to the thinking, talking, listening, reading, and writing we do in everyday life. Everyone knows how an engine, although in perfect repair, can overheat, lose its efficiency, and stop as the result of internal obstructions — sometimes even very minute ones.

Everyone has noticed, too, how human minds, also apparently in perfect repair, often overheat and stop as the result of dogmas, received opinions, or private obsessions. Sometimes a set of obsessions may seize multitudes of people at once so that hysteria becomes epidemic and nations go mad. The recurrence of such disorders tempts many of us to conclude that there are fundamental and incurable defects in "human nature."

The futility of such an attitude needs hardly to be remarked upon. Many modern studies, notably in psychology, anthropology, linguistics, and literary criticism, reveal to us the nature and origin of these obstructions in our intellectual machinery. Can we not, by seeking and removing them, get it to run more efficiently.? We do not scold an engine for overheating, any more than we scold a man for having a fever. Are we getting anywhere by merely scolding each other for "lack of principle," "stupidity," "intellectual laziness," and all the other sins we accuse each other of?
Author: Samuel Ichiye Hayakawa
publication date: 1941