How to get on the stage and how to succeed there 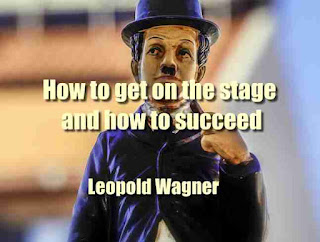 The actor's profession has always cast its magic spell over the dwellers in cities and towns. Even in remote country places the chance visit of a wandering theatrical company turns the head of many a native and often succeeds in seducing him from the prosaic walk of his daily life, c to strut and fret his hour upon the stage, disport himself in gay apparel, declaim heroic speeches, and merit the applause of the groundlings.
There can be few mortals that have not at some period of their lives been stage-struck. It is not only the youth entranced by his first visit to the play who cherishes the conviction that he is a born actor. We once made the acquaintance of a middle-aged newsagent who bitterly bewailed his lack of opportunities to gratify his ambition by going on the stage. As we strolled homewards together at dead of night, he improved the occasion by loudly reciting the Closet Scene from Hamlet under a street lamp, until his performance was rudely interrupted by an irate householder pouring the contents of the water-jug on his offending head.
Whether that disappointed newsagent would have made his mark as an actor we will not attempt to say. That so many persons drift into commonplace occupations, and eventually turn puritanical in their views of the stage, or, if they do not go to this extreme, allow the cares of life to wean them from the attractions of the playhouse, is no evidence that a fair vision of theatrical fame was never unfolded to their minds.
Others become ardent playgoers to the end of their days, forgetting at last that the real secret of their interest in the drama must be sought in joyous hours devoted to the mimetic art when life was young. The juvenile recitation, the dramatic duologue, and the school play are things that lie at the root of aspirations that in after years give so many recruits to the theatrical ranks. \
Dramatists and dramatic critics have in almost all cases owed their future literary pursuits to a youthful fondness for the play. The recreative direction of a toy theatre, too, has produced some of our most successful stage managers. Not a few of the most admired actresses of our time developed their early taste for the drama amid influences very far removed from the theatre, namely, at the convents where they received their education.
The periodical dramatic entertainments superintended by the gentle Sisterhood within convent walls are in all respects excellent. Mrs Beerbohm Tree took part in a Greek play before Mr Gladstone during her Queen's College days, while Mr F. R. Benson was assigned the organization of the Greek plays produced at Oxford University in his time. On the other hand, there are those who, like Miss St. Cyr and the late George Barrett, never witnessed a dramatic representation until they entered the theatre professionally, and had perforce to nurse their ambition by stealth.
In their case, as in that of many others, the dramatic instinct was assuredly inborn; despite every obstacle, they ultimately won their way to success on the boards. Supporters of the Church and Stage Guild would probably be astonished were an enumeration made of modern actors and actresses who are the offspring of clergymen, some of them not at all kindly disposed towards the stage.