Free will and human responsibility; a philosophical argument by Herman Harrell Horne (1912) 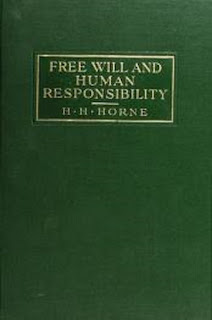 the following monograph grew out of class exercises in my course in philosophy given for a number of years in Dartmouth College. In order to quicken interest by varying the method and to make philosophy touch life, we would sometimes have classroom debates on philosophical subjects by the students under the guidance of the instructor. The main issues in philosophy, because of their two-sided nature, of the uncertainty of their settlement, and of their stimulating effect on both the imagination and the intellect, lend themselves easily to the method of debate, as Plato, the Scholastics, and Bishop Berkeley illustrate.

Now the question as to whether the fate of man rests at all with himself or not, which is the problem this little volume discusses, is one of perennial freshness and interest, to which the newest movements of thought always contribute additional data without thereby finally solving the issue. If any suppose the question is worn out, let him recall the notable newly translated work of the leading French pragmatist, Bergson, on Time and Free Will} Each new generation of thinkers comes upon this problem afresh, and to it a class in philosophy will always respond. In my own work I have felt the need of a clear brief treatise covering both sides of the issue in outline, to which students might be referred, and which might perhaps be used as a text for discussion at a certain point in the course. These pages are designed to supply such a need.