Nightshade the confessions of a reasoning animal 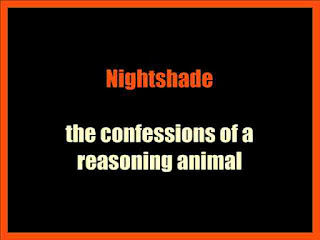 Excerpt:
I shall never get away from this town—never. Last night when I went home from my office I discovered that, or rather I became conscious of what I had long felt subconscious.
As I got to the foot of the long narrow flight of stairs, worn thin by the many years’ tread of my father and his clients and of me and my clients, a couple of Lodi youths, hiding forlornly in the cold shelter of the doorway, greeted me with: “Hello, Dag!” It was dark and cold, and after two days of thawing and a day of freezing, glacier-like ice sheets covered the new cement pavement on Main Street and the dirt roads which branch off from it.
It seemed to be a Lodi night. On the corner stood Hoppy Eggler and Rusty Lattin playing “Red Wing” on the mouth organ, while two or three miserable little Fronk and Munks boys listened shivering. Under the town’s one arc-light, humped over in her rusty black like an ancient raven, one of our many widows crept cautiously over the ice, feeling her way with a cane.
There is a field on the way home which I always* stop to look at. Every day and every night its aspect is different, infinite in its variations as life is, but al¬ ways beautiful, as life is not. Last night it stretched away from its virgin white to the dimly seen low hills of the southwest, and a bitter wind blew across it out of the darkness.
Far back on its other edge there sparkled in a semicircle the tiny kerosene street lamps of Palmira Street. It made me think of the vast and lonely Russian steppes, beaten by the icy wind that blows from Siberia; but the steppes were far away and strange and alien, while this field was strange and infinitely familiar: it was home.
It was then I knew that my ancestors, four or five generations of them, had stuck around here too long: that Styxtown is in my blood, never to be eradicated: that I am like the dyer’s hand—subdued to what I work in. No matter where I go, I shall always come back here: no other place will ever be my own place, home, to me. It is irrevocable, my sentimental, instinctive anchorage in this obscure little country town, and above all things, I hate to acknowledge the irrevocable.
I didn’t mean to coach the girls’ basketball team again this year. This was the winter I meant, after infinite delays, to put my proud, abject, facile, brittle, many-coloured soul on paper, together with the soul of Styxtown, of which it is a part. I knew that this would take all of my time, and I knew, too, that that soul of mine, which needs as a mirror the eyes of girls, loses itself in the reflection if the mirror is too near. But they began to come after me—Jane, who played on the team last year, stocky, fiery little Jane with her funny little nose in the midst of a pretty face which is always almost dirty; and Minnie with her fierce, feverish look of a sick hawk: the rest of them I didn’t know until later. But for several weeks I didn’t go near them, for I was writing a story called “Forgiveness.”
It was about a Styxtown man and wife, and the idea was good, as all my ideas are; but I am too lazy and too listless for the gruelling labour of putting down my thoughts in cold black and white, of spinning something out of nothing as a spider spins her web.
the book details : Download 15 MB