Letters from an old-time salesman to his son 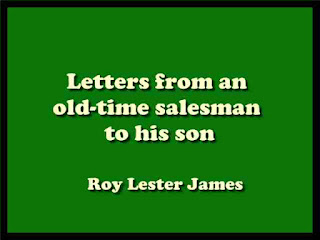 The most refreshing thing about these letters is that they are real letters, written by a real salesman to a real son. Therein they differ from so many books of this character. There is a certain satisfaction in knowing that what you are reading was written by a man who has been through the mill. Another refreshing thing about these letters is that they were not written for publication. The motive behind them is an interesting one. Mr James began his business career as a salesman, calling on the retail trade in small towns.

Shortly after a son came to bless his home—a red-headed boy who was christened “Hal.” Like all men who make a success of their profession, Mr James believed in his work, and his dreams of the future for his son always pictured the boy as a travelling salesman. As the boy grew and developed traits of character, what was more natural than that his dad, who shared the boy's problems, should visualize his son with these same peculiar traits running afoul of the same pitfalls and snags that beset the path of every young man in sales work?


What was more natural than that he should try to impart to his boy the secrets of his success as a salesman and manager of salesmen so that the son might use the father's achievement as a shortcut? Through some underground avenue, best known to himself, it came to the attention of the editor of the Libby house-organ that Mr James—then a de¬ apartment manager—was writing a series of most interesting human letters to his boy. After much persuasion, Mr. James agreed to the anonymous publication of these letters — with deletions of a personal character—in the Libby salesman’s bulletin. For two years the letters of an old-time salesman to his son were the most eagerly read feature of one of the most readable of salesmen’s publications.

After the letters had run the gamut from sales¬ man to general sales manager, during the writing of which the author himself had risen to the position of General Sales Manager of his Company, they came to an end. That they had exerted a powerful influence in moulding the character of every Libby salesman there can be no question. No man could read the letters without being the better for having done so.
And I feel that Mr James in permitting the publication of them in book form, so that the message they carry may be spread out beyond the limited confines of the Libby organization and con¬ veyed to every man who sells things, has taken a big step toward fulfilling the obligation which every man owes to his profession. If every salesman could read this book it would do more for the cause of better, cleaner salesmanship than any other one thing.

The Boy Starts Out—Green and Gullible but Full of “Pep” 9
The Boy Writes That He Has Arrived as a “Regular” Salesman ........ 13
The Boy Thinks the House Should Accept Cancellations 17 The Boy Has Been Promoted to a “Special” Salesman. 21
Dad Gives the Boy Some Sound Advice Regarding Team Work .|i.. 25
The Boy Is Having His Troubles as a Branch Manager. 31
Dad Tells the Boy Why It Pays to Advertise.. 37
Dad Counsels the Boy to Throw Away His Knickers and Put on Long Pants ..... 43
The Boy Has Begun to Solicit Dad’s Counsel. 49
The Boy Has Told Dad of His Latest Pet “Peeve”. 55
The Boy Has Met the Girl—He Sounds Dad Out on Matrimony...... 61
The Boy Has Been Bragging a Little.„. 67
Dad Warns of the Evil Spirit That Whispers “You Haven’t Time” ... 75
The Boy is Given an Unfailing Formula for Landing a Bigger Job ...... 81
Hal Is District Manager Now—His Problem Is Winning the Respect of Men ...... 87
Dad Drops in on a Branch Manager and Finds the Spirit of the Time ..... 93
The Boy Gets a Chance to See Himself as Others See Him 99
Dad Tips Off the Boy to a New Job...105
Dad Gets a Lesson from a Trip to the Farm. 111
Dad Takes an Interest in the Boy’s Big Sales Contest..117
Dad Surrenders When the Boy Lands the Big Job.123