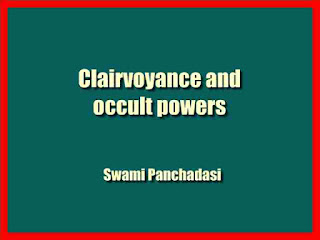 In preparing this series of lessons for students of Western lands, I have been compelled to proceed along lines exactly opposite to those which I would have chosen had these lessons been for students in India. This is because of the diametrically opposite mental attitudes of the students of these two several lands.
The student in India expects the teacher to state positively the principles involved, and the methods whereby these principles may be manifested, together with frequent illustrations (generally in the nature of fables or parables), serving to link the new knowledge to some already known thing. The Hindu student never expects or demands anything in the nature of "proof" of the teachers statements of principle or method; in fact, he would regard it as an insult to the teacher to ask for the same.
Consequently, he does not look for, or ask, specific instances or illustrations in the nature of scientific evidence or proof of the principles taught. He may ask for more information, but solely for the purpose of bringing out some point which he has not grasped; but he avoids as a pestilence any question seeming to indicate argument, doubt of what is being taught him, or of the nature of demand for proof or evidence.
The Western student, on the other hand, is accustomed to maintaining the sceptical attitude of mind — the scientific attitude of doubt and de- mand for proof — and the teacher so understands it. Both are accustomed to illustrations bring- ing out the principles involved, but these illustrations must not be fanciful or figurative — they must be actual cases, well authenticated and vouched for as evidence. In short, the Western teacher is expected to actually "prove" to his students his principles and methods, before he may expect them to be accepted.
This, of course, is not from any real doubt or suspicion of the veracity or ability of the teacher, but merely because the Western mind expects to question, and be questioned, in this way in the process of teaching and learning. Consequently, in this series of lessons, I have sought to follow the Western method rather than the Hindu. So far as is possible, I have avoided the flat positive statement of principles and methods, and have sought to prove each step of the teaching.
Of course, I have been compelled to assume the existence of certain fundamental principles, in order to avoid long and technical metaphysical and philosophical discussions. I have also had to content myself with the positive flat assertion of the existence of the Astral Plane, Akashic Records, Prana, etc., which are fundamental postulates of Hindu philosophy and occult science — for these are established solely by the experience of those who are able to function on the higher planes themselves. But, beyond this,
I have sought to prove by direct and positive evidence (adapted to the Western mind) every step of my teaching and methods. In offering this scientific proof, I have purposely omitted (except in a few instances) all mention of occult or psychic phenomena occur- ring in India, and have confined myself to in- stances occurring in Western lands to Western persons.
Moreover, I have avoided quoting and citing Hindu authorities, and have, instead, quoted and cited from authorities well known and respected in Western lands, such as the Society for Psychical Research, and the prominent scientists interested in the work of the said society. In this way, I have sought to furnish the Western student with examples, cases, and illustrations familiar to him, and easily referred to. Had I cited Indian cases, I might be accused of offering proof that could not be easily verified; and quoting persons unknown to my readers. There is a wealth of such cases and illustrations in India, naturally, but these, as a rule, are traditional and not available in printed form; and these would not likely be very satisfactory to the Western student.
I must, however, positively and firmly state that while these cases and illustrations, these quotations and citations, are purely Western, the principles they illustrate and prove are among the oldest known to Hindu occult science and philosophy. In fact, having been accepted as proven truth in India, for centuries past, there is very little demand for further proof thereof on the part of the Hindus. In the Western world, however, these things are comparatively new and must be proved and attested accordingly.
So, as I have said, I have cut the cloth of my instruction to conform with the pattern favoured for the Western garment of knowledge. So far as the illustrations and cases, the quotations and citations are concerned — these are purely Western and familiar to the student. But, when it comes to the principles themselves, this is another matter — I must be pardoned for stating that these are the outgrowth of Hindu thought and investigation and that he who would discover their roots must dig around the tree of the Wisdom of the East, which has stood the storms and winds of thousands of years. But the branches of this mighty tree are wide-spreading, and there is room for many
Western students to rest in its shade and shelter. In these lessons, I have referred occasionally to my two little books, entitled "The Astral World," and "The Human Aura," respectively. To those who are interested in these subjects, I recommend these little books; they are sold at a nominal price and contain much that will be helpful to the student of Hindu Occult Science. They are not required, however, to complete the understanding of the subjects treated upon in these lessons, and are mentioned and recommended merely as supplementary reading for the student who wishes to take little "side excursions" away from the main trip covered in these lessons. I trust that my students will find the pleasure and satisfaction in studying these lessons that I have in writing them.
Author: Swami Panchadasi
Publication Date:1916