Queen Moo and the Egyptian sphinx 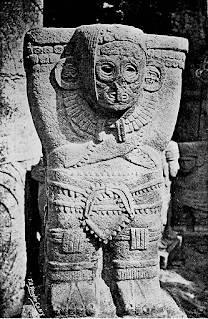 In this work, I offer no theory. In the question of history, theories prove nothing. They are therefore out of place. I leave my readers to draw their own inferences from the facts presented for their consideration.
Whatever their conclusions are no concern of mine. One thing, however, is certain — neither their opinion nor mine will alter events that have happened in the dim past of which so little is known today. A record of many of these events has reached our times written, by those who took part in them, in a language still spoken by several thousand of human beings. There we may read part of man's history and follow the progress of his civilization.


The study of the relics of the ancient Mayas has revealed such striking analogies between their language, their religious conceptions, their cosmogonic notions, their manners and customs, their traditions, their architecture, and the language, the religious conceptions, the cosmogonic notions, the manners and customs, the traditions, the architecture of the ancient civilized nations of Asia, Africa, and Europe, of which we have any knowledge, that it has become evident, to my mind at least, that such similarities are not merely effects of a hazard, but the result of intimate communications that must have existed between aU of them; and that distance was a no greater obstacle to their intercourse than it is today to that of the inhabitants of the various countries.


It has been, and still is, a favourite hypothesis, with certain students of ethnology, that the "Western Continent, now known as America, received its human population, therefore its civilization, from Asia. True, there is a split in their ranks. They are not quite certain if the immigration in America came from Tartary across the Strait of Behring, or from Hindostan over the wastes of the Pacific Ocean. This, however, is of little consequence.

Queen Moo is a mythical Mayan queen written about by Augustus Le Plongeon and his wife, Alice Dixon Le Plongeon. The Plongeons undertook the first excavation of Chichen Itza in 1875 and based their theories about Queen Moo on the murals and inscriptions that they found there. It is generally accepted that Plongeon's theories are not supported by the archaeological evidence, therefore Queen Moo is considered an actual character.
Author: Augustus Le Plongeon
Publication Date: 1900
Company: New York: The Author