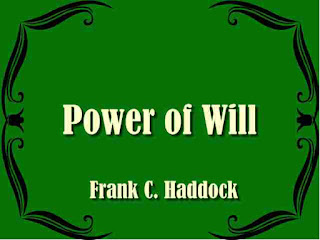 Power of Will has been a pioneer in its chosen field — the only book of its kind, the only kind of its class, the only class in the world. A number of writers, literary and otherwise, have since followed the pathway thus pointed out, some of them exhibiting scant regard for magnanimity, that virtue which, seemingly demanded by the much-exploited " New Thought," is without spiritual littleness and is ever fair in acknowledgements
The author bids all such, Take and confess if they are true knights of the larger age, but, an' they cannot stand so high. Take for their own that which birth forbids creating, since our world life is so great, and in its abundance, every mind may claim to live, even that of the humblest parasite. " Many a frog masquerades in the costume of a bird."
The kindness with which the book has been received, its literary deficiencies being overlooked in view of its practical purpose, and the evidence was given by students that the work has helped many to a larger growth and a better self-handling, has inspired the present revision. The volumes of the Power-Book Library have sought always to be clear, plain, practical, sane and helpful, and neither chicanery nor suspicious " occultism " has to the author been conscious in mind or mood or work. The study of these books will vastly multiply the power of the man or woman, with or without a school V vi Preface education.
The scholarship does not necessarily mean power, but the Library promises personal power whether the student is educated or uneducated, pro-vided he is of average intelligence. To all who follow the instructions, there will unfold, in the measure of effort and capacity, the four great fundamentals — Will-Power, Mind-Power, Magnetism and Practical Ability.
This is a positive assurance. As the present edition goes to press there is an army of over 100,000 students of "Power of Will." This is a record unequalled by any other book of a similar nature in the history of literature.
With thousands of warm letters of praise from people in all walks of life who are being helped to a quick realization of their most cherished ambitions, the author feels that his long labour in preparing the following lessons has not been in vain.
" A stimulus to nervous matter affects a change in the matter by calling forth a reaction in it. This change may be exceedingly slight after the first stimulus, but each repetition of the stimulus increases the change, with its following specific reaction, until by constant repetition a permanent alteration in the nervous matter stimulated occurs, which produces a fixed habitual way of working in it.
In other words, the nervous matter acquires a special way of working, that is, of function, by habit. " From the facts which we have been reviewing, we arrive at one of the most important of all conclusions, namely, that the grey matter of our brains is actually plastic and capable of being fashioned.
It need not be left with only the slender equipment of functions which Nature gives it at birth. Instead, it can be fashioned artificially, that is, by education, so that it may acquire very many new functions or capacities which never come by birth nor by inheritance, but which can be stamped upon it as so many physical alterations in its proplasmic substance.