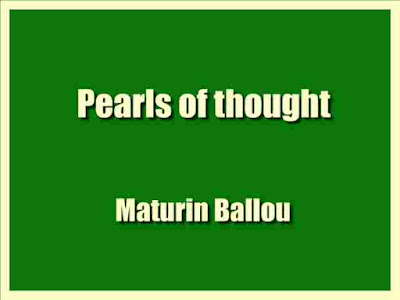 this book contains a good collection of inspirational and practical quotations that may inspire you!
The volume herewith presented is the natural result of the compiler's habit of transferring and classifying significant passages from known authors.
No special course of reading has been pursued, the thoughts being culled from foreign and native tongues from the moss-grown tomes of ancient literature and the verdant fields of today. The terse periods of others, appropriately quoted, become in a degree our own; and a just estimation is very nearly allied to originality, or, as the author of Vanity Fair tells us, " Next to excellence is the appreciation of it."

Without endorsing the idea of a modern authority that the multiplicity of facts and writings is becoming so great that every available book must soon be composed of extracts only, still, it is believed that such a volume as " Pearls of Thought " will serve the interest of general literature, and especially stimulate the mind of the thoughtful reader to further research.
The pleasant duty of the compiler has been to follow the expressive idea of Colton, and he has made the same use of books as a bee does of flowers, she steals the sweets from them, but does not injure them.

To the observant reader many familiar quotations will naturally occur, the absence of which may seem a singular omission in such a connection and classification, but doubtless such excerpts will be found in the "Treasury of Thought," a much more extended work by the same author, to which this volume is properly a supplement. Of course, care has been taken not to repeat any portion of the previous collection.

Excerpt:
Outward actions can never give a just estimate of us since there are many perfections of a man who are not capable of appearing in actions.
Addison.
Mark this well, ye proud man of action! Ye are, after all, nothing but unconscious instruments of the men of thought.
Heinrich Heine.
Actors. Players, sir! I look upon them as no better than creatures set upon tables and joint stools to make faces and produce laughter, like dancing dogs. But, sir, you will allow that some players are better than others? Yes, sir; as some dogs dance better than others.
Johnson.
Adversity is like the period of the former and of the latter rain, cold, comfortless, unfriendly to man and to an animal; yet from that season have their birth the flower and the fruit, the date, the rose, and the pomegranate.
Walter Scott.
Two powerful destroyers: Time and Adversity.
A. de Musset.
Our dependence upon God ought to be so entire and absolute that we should never think it necessary, in any kind of distress, to have recourse to human consolation.
Thomas a Kempis.