Legends of ancient Egypt: stories of Egyptian gods and heroes 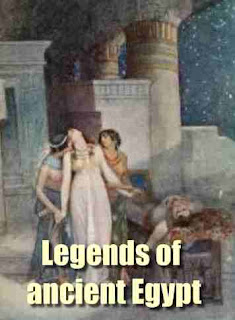 From Introduction:
Associated with the early faiths of all peoples are various legends that help us to understand how they grew and developed, how they came out of darkness into light. The story of the origin of our own race is rich in such traditions, and the myths of Greece and Rome are common knowledge. But in the Egyptian story, there is little to tell of the childhood stage of a people's development.
Far as we can go back in their records, we always find Egypt in an advanced stage of civilization, with religion removed almost entirely beyond the stage of myth. The one great legend connected with their faith is the story of the sufferings of Isis and her search for Osiris, her spouse, and even this is probably allegory rather than myth.

The faith professed by the Egyptians was as noble and sublime as any that the world has known. That it fell later into a confused belief in countless petty gods was due to priestcraft rather than to any fault in the faith itself. In all about them the Egyptians saw the hand of God in the rising 2f the Nile and the fertilizing soil; in bird and beast, in sun and moon, in sky and earth and sea. But no mere nature- worshippers were they. The different aspects of nature which attracted their curiosity or commanded their awe were but symbols of a Supreme God, who manifested himself in all his works, and who must need be honoured by the gift of the best of their handiwork.

Contents of the books

I. THE PEOPLE OF ANCIENT EGYPT 13
II. THE BELIEFS OF THE EGYPTIANS 20
III. THE BEGINNING OF ALL THINGS 30
IV. THE LIFE BEYOND 33
V. THE STORY OF RA AND ISIS 41
THE STORY OF ISIS AND OSIRIS
VI. THE KINGDOM OF OSIRIS 49
VII. THE QUEST OF ISIS 77
VIII. THE PERSECUTION BY TYPHON 104
IX. THE WORK OF HORUS 130
ANCIENT RULERS OF EGYPT
X. THE BUILDERS OF THE PYRAMIDS 151
XI. THE RIDDLE OF THE SPHINX 1C7
XII. THE GUARDIANS OF THE DESERT 172
XIII. THE BUILDERS OF THE TEMPLES 175
XIV. THE LADY OF THE OBELISKS 183
XV. THE JOURNEY OF KHENSU TO BEKHTEN 190
XVI. IN THE DAYS OF THE FAMINE
io Egyptian Gods and Heroes
CHAPTER PAGE
XVII. THE TREASURE-CHAMBER OF RHAMPSINITUS 204
XVIII. THE REIGN OF THE TWELVE KINGS 215
XIX. THE SHADOW OF THE END 222
XX. THE GLORY OF THE SUNSET 233
XXI. LIGHT UPON THE DARKNESS 252
Download PDF with coloured illustrations