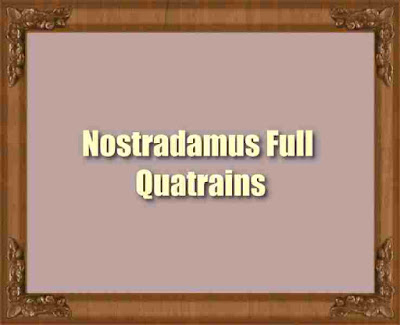 Nostradamus completed a total of 942 quatrains which he organized into Centuries - groups of 100 quatrains (one Century only had 42 quatrains). A quatrain is simply a poem with 4 lines.

Michel de Nostredame, usually Latinised as Nostradamus, was a French astrologer, physician and reputed seer, who is best known for his book Les Prophéties, a collection of 942 poetic quatrains allegedly predicting future events. The book was first published in 1555 and has rarely been out of print since his death
After another visit to Italy, Nostradamus began to move away from medicine and toward the "occult". Following popular trends, he wrote an almanack for 1550, for the first time in print Latinising his name to Nostradamus. He was so encouraged by the almanack's success that he decided to write one or more annually.
Taken together, they are known to have contained at least 6,338 prophecies, as well as at least eleven annual calendars, all of them starting on 1 January and not, as is sometimes supposed, in March. It was mainly in response to the almanacks that the nobility and other prominent persons from far away soon started asking for horoscopes and "psychic" advice from him, though he generally expected his clients to supply the birth charts on which these would be based, rather than calculating them himself as a professional astrologer would have done. When obliged to attempt this himself on the basis of the published tables of the day, he frequently made errors and failed to adjust the figures for his clients' place or time of birth/