A comparison of Egyptian symbols with those of the Hebrews 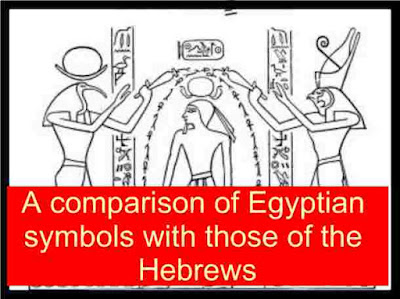 The origin of the science of symbols is lost in the distance of time, and seems to be connected with the cradle of humanity — the oldest religions were governed by it; the arts of design, architecture, statuary, and painting were born under its influence, and primitive writing was one of its applications. Did symbols exist in spoken, before being translated into written, language? Were primitive words the source of symbols? are the questions on which these researchers are based.

The first men, in order to express abstract ideas, borrowed images from surrounding nature; by a surprising intuition, they attached to each race and species of animals, to plants, and the elements, ideas of beauty or ugliness, of good or evil, of affection or hatred, of purity or uncleanness, of truth or error.
Those fathers of the human race did not compare, but they named their ideas from corresponding objects in the material world; thus, if they wished to say, the king of an obedient people, they did not compare him to a bee governing a submissive hive, but they called him bee; if they desired to say filial piety, they did not compare it to the stork feeding its family, but they called it stork; to express power, they called it bull; the power of man, the arm; strength of soul, lion; the soul aspiring to heaven, the hawk that sails in the clouds and looks steadfastly at the sun.

Primitive writing, the image of primitive speech, was entirely composed of symbolic characters, as demonstrated by the examples of China and Mexico, and the symbols we have just cited in Egyptian writing.^
This theory results from the following facts: Horapollo teaches the principle of Egyptian symbology when he says that the hawk is the symbol of the soul; for in the Egyptian tongue, the name of the Hawk is Baibth, signifying soul and heart — Bai, soul, and eth, heart. , (Horap. I. 7.) Thus, in Egypt, symbology rested on the fact that the name of a symbol contained the idea or ideas symbolized since the Hawk borrowed its significance from the two roots of its name. To us, the testimony of HorapoUo appears positive; is it indisputable?
The knowledge of symbols employed by Champollion, and by the learned of the present day, to decipher Egyptian writings, depends almost entirely on Horapollo; the Rosetta-stone showed the use of those characters mingled with alphabetic writing, by partly confirming the text of the Egyptian hierogrammatic. "Hitherto," says Champollion, "I have recognized in the hieroglyphic texts, but thirty of the seventy physical objects indicated by Horapollo in his first book, as symbolic signs of certain ideas; and of these thirty, there '
The descriptive notice of Egyptian monuments, in the Paris museum, displays the faith of the learned Frenchman in the Egyptian writer. Horapollo could not, then, have been mistaken in announcing as a fact known in his day, that certain signs had certain significations because the name contained the signification.
A meaning may be invented for a symbol, or it may be distorted from that it really possesses; but that an Egyptian writer should suppose so extraordinary a principle as that of homonomy, and that that principle should be false, is -more than we can admit.
This reasoning has appeared conclusive to several learned men who have studied Egyptian writing; among the first of whom, Zoega, author of a celebrated Treatise on Obelisks, recognized it in principle.