The tale of Troy 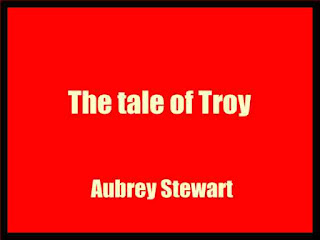 Once upon a time, there lived a king and queen, named Tyndareus and Leda. Their home was Sparta, in the pleasant vale of Laconia, beside the river Eurotas. They had four children, and these were so beautiful that men doubted whether they were indeed born of mortal parents. Their two sons were named Castor and Polydeuces. As they grew up, Castor became a famous horseman, and Polydeuces was the best boxer of his time.
Their elder daughter, Clytemnestra, was wedded to Agamemnon the son of Atreus, king of Mycenae, who was the greatest prince of his age throughout all the land of Hellas. Her sister Helen was the loveliest woman ever seen upon earth, and every prince in Hellas wooed her for his bride; yet was her beauty fated to bring sorrow and destruction upon all who looked upon her.
The suitors of Helen were many, and were so fierce in their wooing that their threats affrighted Tyndareus, who was old and feeble; for each one vowed that if he did not win her hand he would wreak a fearful vengeance both on the rival who should be preferred to him and on the family of the bride. At last, Tyndareus made all the suitors agree to swear a mighty oath, that, whosoever among them might become the husband of Helen, they would all stand by him, and help him to win back his wife if anyone robbed him of her. After this,
Tyndareus bade Helen herself choose out of all her suitors the one whom she loved best for her husband. She chose Menelaus, the brother of Agamemnon; and when they were wedded, Tyndareus gave up his kingdom to his son-in-law, and Menelaus and his wife reigned in Sparta. How Paris carried off Helen Far away, across the blue ^gean, was the city of Troy, standing on a hill in the plain between Mount Ida and the sea, on the southern shore of the Hellespont, the strait over which Phrixus and his sister Helle swam on the back of the ram with the golden fleece. But Helle slipped off into the sea and was drowned, and so the strait is called the Hellespont to this day.
The king of Troy was rich and mighty; he dwelt in a stately palace, built of polished stone, and stored with corn and wine; his flocks were pastured on Mount Ida, and his city was the greatest on all the Asian coast. His name was Priam, and his eldest son was named Hector. Just before his second son Paris was born, his queen, Hecuba, dreamed that she had brought into the world a flaming torch, by which all the city of Troy was set in ablaze. So, when Paris was born, they felt sure that he would bring misfortune upon them; yet they had not the heart to kill the babe, but took it away out of the city, and left it in a thicket on Mount Ida. Here a shepherd found it
Content of the book

'How Paris carried off Helen. 1
How the Heroes gathered at Aulis 13
How Achilles quarrelled with Agamemnon . . . 27
How Paris fought Menelaus. 45
How Hector fought Ajax. .61
How Hector tried to burn the Ships 87
How Patroclus lost the Arms of Achilles . . . .109
How Achilles slew Hector. .129
How the Greeks fought the Amazons 145
How Paris slew Achilles. .167
How Philoctetes slew Paris. 193
How the Greeks took Troy. .215