The Road by Jack London 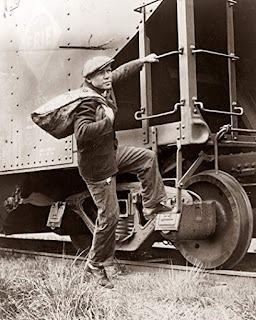 A series of anecdotal tales of dodging conductors, railroad security, town sheriffs, and bumming meals while perfecting the art of lying.  What an interesting character this man was. He was a hobo, a seaman, a gold prospector, just to name a few. And he drew on all these life experiences to write some of the most successful novels of the early 20th century


This compilation of stories and essays is gleaned from the remembrances of an older and more successful London, looking back on his days as a tramp and hobo. We learn about life aboard boxcar trains, running and evading the train conductors, time in prison for vagrancy and the ubiquitous begging and scamming for food.

Also detailed is London’s own (at age 18) experience as a part of Coxey’s Army of unemployed protesters in 1894. Most interesting to me was the clearly planted seeds of London’s later socialist ideological passions, growing from his humble perspective of a wayward soul on the roads of North America.