From coast to coast with Jack London 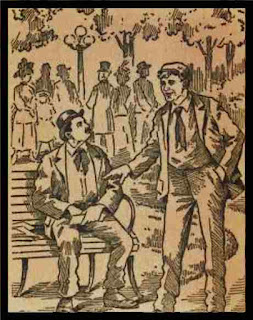 Excerpt:
On arriving in New York City I had drifted to the editorial rooms of the newspaper publishing the best feature section in connection with its Sunday issue.
The World had accepted my proffer to furnish an exclusive interview. A pencil pusher was assigned to take notes of my story which he was ordered to transcribe into a human-interest article for the magazine section. Most entertaining was the tale of hobo life which I had to unfold. It reviewed an existence fairly brimming with adventures and experiences the like of which were never encountered by folks who trailed in the well-beaten ruts of legitimate endeavour.
Of paramount importance was the circumstance that securely pasted in a memorandum I carried on my travels documentary evidence which verified the fact that my statements were based on actuality. 8 From Coast to Coast with Jack London. To this day when the possession of the happiest home seems to have effectually quenched the spirit of unrest which heretofore had driven me for more than thirty years over the face of the globe, I still treasure the humble notebook as my most cherished belonging — the only relic remaining to remind me of the days
I wantonly wasted on the Road. Among no end of other most worthy services per-formed by the memorandum, many an envious "knocker" had his blatant mouth shut up in short order by a perusal of its pages. It contained records which irrefutably proved that I, who was a homeless outcast, had gloriously made good where all my fellows had failed to gain even a fleeting remembrance by posterity. There were recommendations galore donated by grateful railroad companies and others by individual railroaders for saving — ofttimes at the risk of serious personal injury

OUR ADVENTURES: Page
FIRST— The Meeting of the Ways 7
SECOND— The Smoky Trail 18
THIRD— In the Thick of the Hobo Game. 28
FOURTH— Hyenas in Human Form 31
FIFTH — The Hoboes' Pendulum of Death 37
SIXTH — The Killing of the Goose 46
SEVENTH— Shadows of the Road 50
EIGHTH — Old Strikes & Company 55
NINTH— Deadheading the Deadhead 66
TENTH— Sons of the Abyss 17
ELEVENTH — The Rule of Might 84
TWELFTH— Prowlers of the Night 89
THIRTEENTH— Bad Bill of Boone 94
FOURTEENTH— Old Jeff Carr of Cheyenne .... 107
FIFTEENTH — Sidetracked in the land of Manual 17
SIXTEENTH— The Parting of the Ways.. 126
the book details : Download 8.6 MB