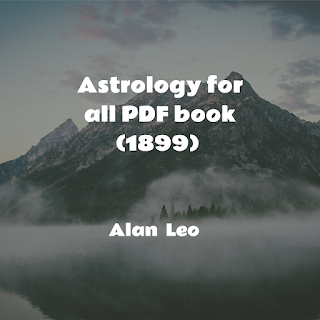 from the introduction:
In spite of strong governmental opposition, it nourished in the early days of the Roman Empire, but through the pandering of its exponents to political exigencies it became corrupted and sank into what was known as judicial Astrology, finally becoming nothing more than a form of divination by which horoscopes were cast for the hour. By this time the knowledge of Uranus, the astrologer's star, had entirely disappeared, and substitutes were used in horary Astrology?


to supply the place of the mystic planet; the old traditions were also lost or became so corrupted and distorted, that Astrology could no longer be called a science, but a miserable form of fortune-telling divination. To restore the Astrology of the Chaldeans is the only hope that is left for all who would make Astrology a practical and beneficial study.


With all due respect to the modern exponents of the science, we are bound to admit that their study has been mixed with too many terms and definitions belonging to horary Astrology, a system from which no comparisons can be drawn when considering the methods of astrological practice taught by the wise men of the east. The discoveries of Egyptologists prove that the Egyptians had no claim to the invention of Astrology, they were taught by the Chaldean priests, who believed that " An affinity existed between the stars and the souls of men; that the ethereal essence is Divine; that the souls of men are taken from this reservoir, and return to it at clearly; and that the souls of the more eminent of mankind are converted into stars. With them, " the soul was a spark taken from the stellar essence," a belief held also by the great Pythagoras,