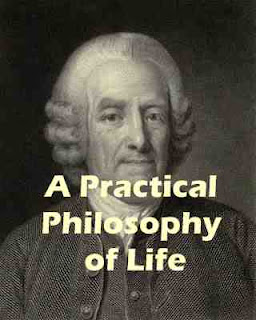 The author in this short book illustrates the practical part of Emanuel Swedenborg's philosophy.
Contents:
I The Goal of Life - II Everyday Pursuit of the Goal - III Adjustment of the Personal Life

No attempt is made in these chapters to expound the whole of Swedenborg s philosophy. Ordinarily, it is his more metaphysical philosophy that is presented; here, in discussing the goal of life and its pursuit, it is his ethical philosophy that is outlined.
The reader will find hardly anything about the doctrines of degrees, forms, etc., with which Swedenborg’s philosophy is generally identified. He will find rather the working principles for life which that philosophy affords. It should also be remarked that it is not the aim to reproduce Swedenborg^s ethical philosophy in his own words.
No philosophy means much until it has been assimilated. Without apology, therefore, I present outlines of that philosophy at the point of its application to needs and questions, not only in my own language but as I apprehend this philosophy and its applications.
I do not quote Swedenborg more often than I do, for the further reason that his language is technical, and therefore somewhat estranging. Other writers are generously quoted, not only because they give a contemporary phrasing of Swedenborg’s thought, but because it then appears how comprehensively Sweden- borg discussed what is in the minds of others.
His very different language often obscures this simple fact. Swedenborg not only has an ethical philosophy to be distinguished from his metaphysical; that ethical philosophy is complicated by much else in his writings, from which it is also to be distinguished. In his earlier years, he was engaged as a philosopher on scientific questions; in his later period, his philosophy is involved in his theology. But if the ethical philosophy is not wholly separable from these other elements, it is distinguishable. We have tried to hold to it.
The role of philosopher, moreover, was his one lifelong role. Of the need at this day for a unifying and directive philosophy of life, we have something to say at once, and shall not anticipate the subject here. This brief presentation of Swedenborg^s philosophy, and of what can be made of it,
we offer in the hope that many will find in it the means of supplying that urgent need for themselves and for others.