The Ultimate Truth The Present 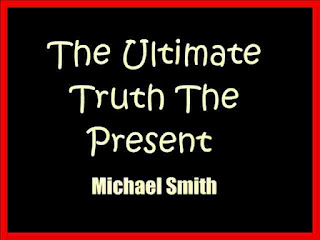 A man should look for what is and not for what he thinks should be. Albert Einstein Truth you can check: It is a matter of fact as the ground and as useful as food. It's the kind of truth that can make hate and war as unnecessary as ignorance. Charles Darwin revealed how evolution works, but not what it really means. Evolution is no longer just a theory; it has been proven true beyond a reasonable doubt. The problem is, even people who believe evolution is true to disassociate themselves from the process.

They somehow skipped all the lower forms of animal life and just started out at the top of the evolutionary ladder. The evidence says we evolved as life evolved. Human beings did not just appear at the top of the evolutionary ladder to reap the benefits of those millions of years of evolution without having to live through it. In other words, you were those other animals. Someone had to be them. You had to be lower animals to be a human now. You lived as all the different animals in your evolutionary line. You lived through millions of years, and millions of lives and deaths to get where you are now.

That's what Darwin's book means. In addition to the fossil evidence, the genetic code proves that all animals, including us, evolved from bacteria over the last 700 million years on earth. In other words, you were a microbe, an insect, a fish, a dinosaur, an ape... When all of the evidence (100%) says something happened, and there is no evidence (zero) that anything else could have happened, it is the truth beyond a reasonable doubt to honest, rational people. We have come a very, very long way, but we have a little further to go. The next and last step in our evolution is learning and accepting the truth of life, and this includes acknowledging our true past. The truth will free us from the animal world we all evolved from.