The problems of theism, and other essays 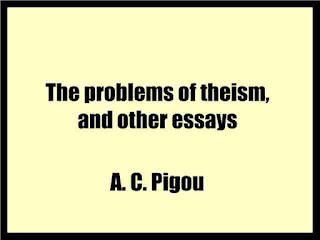 The essays contained in this volume were written at various times during the past few years and were sent to be printed in April last. They are the result, not of my main work, but of a bye-occupation, and they do not pretend to deal with the subjects discussed in them from the standpoint of a professional student. They fall into two divisions. The first four are direct discussions of the problems with which they deal; the other three are critical expositions of important views.

All seven are addressed to the general reader and are written with as little reference as possible to technicalities. The essay on the " General Nature of Reality " is, however, likely to present difficulties to persons who have no acquaintance with philosophy, and — though in some measure the argument of the second essay depends upon the conclusions reached in it — should probably not be read by them. Essays IV., V., and VI. are reprinted, with alterations, from the International Journal of Ethics; and Essay VII. from the Independent Review. The other three are new.

For the general philosophical standpoint that I have adopted, I am chiefly indebted to the writings of the late Professor Sidgwick. The Hon. Bertrand Russell, F.E.S., and Mr A. H. Moberly has helped me with valuable criticisms in connection with several of the essays — Mr Eussell, in particular, has very kindly read the whole of my manuscript; and Mr J. M. Keynes and the Eev. J. E. P. Sclater has made useful suggestions upon special points. I need hardly say that the spirit of the whole, the book is tentative, and the conclusions reached provisional.

Author: A. C. Pigou - Arthur Cecil Pigou was an English economist. As a teacher and builder of the School of Economics at the University of Cambridge, he trained and influenced many Cambridge economists who went on to take chairs of economies around the world.
Publication Date: 1908