The Golden Ages of History 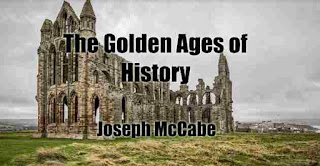 The catastrophe which oppresses the mind of the race in our time leads many of us once more to make ironic reflections upon the nature of progress. Is it, after all, an illusion?
Nearly two hundred years ago the French philosophers, who did so much to emancipate man's courage as well as his intellect, discovered that there lies before the race an era of unlimited " perfectibility," as they called progress. For the first time in history, men learned that neither supernatural curse nor natural law restricted their power to improve themselves and their social forms; and the discovery a century later of the truth of evolution set a seal upon the new charter of our rights.

But the larger knowledge of history which we acquired in the course of the nineteenth century led many writers to oppose this view. The path of humanity is, they say, like that of a planet circling around a sun, giving us an eternal alternation of summers and winters, not a straight and ascending course through time. Progress is cyclic.
The race passes from vitality to decay and then, slowly and laboriously, back to vitality. Every long-lived empire has had a succession of Golden Ages and Dark Ages; and time and again some portion of the human family the Assyrians, the Chaldeans, the Phoenicians, the Greeks, and the Romans have created a superb polity which in a few centuries crumbled into dust.
we entered upon "the twentieth century with such promise of peace and such consciousness of power that we thrust aside this melancholy theory of progress and returned to the inspiring philosophy of Diderot and D'Alembert. There would be no more Dark Ages. Our trail had crossed the foothills, with their disheartening rise and fall, and before us were the shining peaks of some vaguely wonderful civilization. Now . . .
Whatever may be the issue of the present conflict, we are skirting the edge of the pit. We sank swiftly from the highest and, apparently, the most secure height which the race had yet reached, and in less than a quarter of a century from the optimistic years, we found ourselves confronting the spectre of a Dark Age with all its barbaric features made still more horrid by the very science which had lifted us so high.