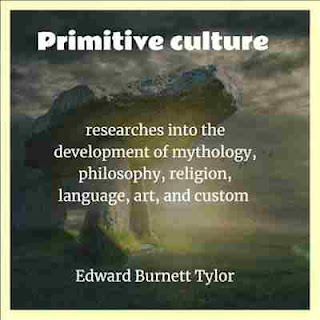 The present volumes, uniform with the previous volume of ' Researches into the Early History of Mankind ' (ist Ed. 1865; 2nd Ed. 1870), carry on the investigation of Culture into other branches of thought and belief, art and custom. During the past six years, I have taken occasion to bring tentatively before the public some of the principal points of new evidence and argument here advanced. The doctrine of survival in culture, the bearing of directly-expressive language and the invention of numerals on the problem of early civilization, the place of myth in the primitive history of the human mind, the development of the animistic philosophy of religion, and the origin of rites and ceremonies, have been discussed in various papers and lectures, 1 before being treated at large and with a fuller array of facts in this work.

discussing problems so complex as those of the development of civilization, it is not enough to put forward theories accompanied by a few illustrative examples. The statement of the facts must form the staple of the argument, and the limit of needful detail is only reached when each group so displays its general law, that fresh cases come to range themselves in their proper niches as new instances of an already established rule. Should it seem to any readers that my attempt to reach this limit sometimes leads to the heaping up of too cumbrous detail, I would point out that the theoretical novelty as well as the practical importance of many of the issues raised, make it most unadvisable to stint them of their full evidence. In the course of ten years chiefly spent in these researches, it has been my constant task to select the most instructive ethnological facts from the vast mass on record, and by lopping away unnecessary matter to reduce the data on each problem to what is indispensable for reasonable proof.

SINCE the publication of this work in 1871, translations have appeared in German and Russian. In the present edition, the form of the page has been slightly altered, for the convenience of re-issue at once in England and America. The matter, however, remains substantially the same. A few passages have been amplified or altered for greater clearness, and on some points, additional or improved evidence has been put in. Among the' anthropologists whose published reviews or private communications have enabled me to correct or strengthen various points, I will only mention by name Professor Felix Liebrecht, of Lie*ge, Mr Clements R. Markham, Professor Calderwood, Mr Ralston, and Mr Sebastian Evans.

It may have struck some readers as an omission, that in a work on civilization insisting so strenuously on a theory of development or evolution, mention should scarcely have been made of Mr Darwin and Mr Herbert Spencer, whose influence on the whole course of modern thought on such subjects should not be left without formal recognition. This absence of particular reference is accounted for by the present work, arranged on its own lines, coming scarcely into contact of detail with the previous works of these eminent philosophers.


An objection made by several critics as to the accumulation of evidence in these volumes leads me to remark, with sincere gratification, that this objection has in fact been balanced by solid advantage. The plan of collecting wide and minute evidence, so that readers may have actually before them the means of judging the theory put forward,

This is one of the most important books in the history in its field, the author is Sir Edward Burnett Tylor who was an English anthropologist, the founder of cultural anthropology, in this book he invented the word animism which he defined it as "the general doctrine of souls and other spiritual beings in general".