The discovery of the mind 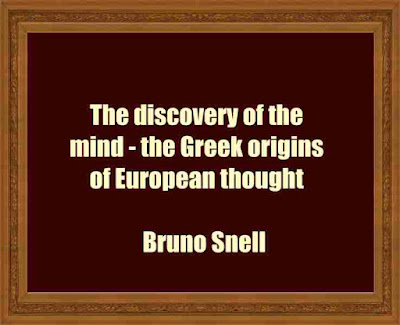 European thinking begins with the Greeks. They have made it what it is: our only way of thinking; its authority, in the Western world, is undisputed. When we concern ourselves with the sciences and philosophy, we use this thought quite independently of its historical ties, to focus upon that which is constant and unconditioned: upon truth; and with its help, we hope to grasp the unchanging principles of this life.
On the other hand, this type of thinking was a historical growth, perhaps more so than is ordinarily implied by that term. Because we are accustomed to regarding the Greek way of thinking as obligatory, we instinctively — or should we say naively? — project it also into thought processes of another order.

The discovery of the intellect cannot be compared with the discovery of, let us say, a new continent. America had existed long before Columbus discovered the New World, but the European way of thinking did not come into being until it was discovered; it exists by the grace of man's cognizance of himself. All the same, our use of the word discovery can, I think, be defended.
The intellect was not ^invented', as a man would invent a tool to improve the operation of his physical functions or a method to master a certain type of problem.
As a rule, inventions are arbitrarily determined; they are adapted to the purpose from which they take their cue. No objective, no aims were involved in the discovery of the intellect. In a certain sense, it actually did exist before it was discovered, only not in the same form, not qua intellect.