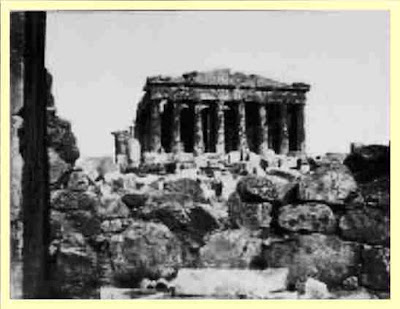 From preface:
The author of a book on Ancient Athens must need to owe much to his predecessors, and these are so many that, in an attempt to make more particular acknowledgement, there is no little danger of omission. In stating a few of the sources from which I am conscious of having borrowed most, I have no wish to slight the more numerous authorities to which others, and possibly I myself, owe as great or perhaps a greater debt. But this difficulty can hardly be avoided without allowing a preface to grow into a bibliography.
In order to disencumber the book of controversial matter, such discussions have been relegated, as far as possible, to the notes at the end of some of the chapters. Apart from these, it has been my aim to give as clearly and directly as possible the impressions produced by the sites and buildings described, as viewed in the light of the references made to them by classical authors.
Where so much is doubtful, no writer can expect all his conclusions to be undisputed; but I trust that the book will not be found to have misrepresented either the available evidence or the theories that ha\-e been based upon it. The more advanced school of topographers may probably accuse me of a conservative bias, which I frankly admit, in so far as it implies that, where the evidence appears to be evenly balanced, I prefer to follow an opinion that is familiar and that has commended itself to generations of scholars, rather than to adopt the newest and most brilliant hypothesis.
The photographic illustrations for this book are some of them made from plates taken expressly for the purpose by Mr C. Demetrion of Athens. Others are selected from the galleries of Athenian photographers, especially the admirable series of Messrs. Rhomaides, whom I have to thank for their courteous permission to reproduce many of their finest plates.
The question of the spelling of Greek names is always difficult; even if a scientific system be adopted, it can- not be followed with rigid accuracy. My general rule has been to transliterate from the Greek to the Latin alphabet as an educated Roman would have done. But some exceptions, " Nike " for example, are almost inevitable for convenience; nor have I aimed at any complete consistency in the use of forms in -os and -us, -on and -um, a matter on which Roman usage itself varied. In spelling, custom and familiarity must be the paramount consideration
Author: Ernest Arthur Gardner
Publication Date:1907
Publisher New York ; London: Macmillan
Contains numerous illustrations