An old Babylonian version of the Gilgamesh epic 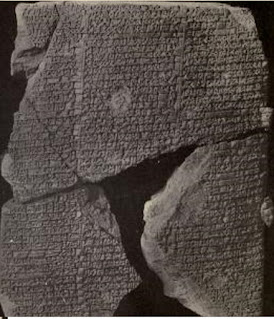 The Gilgamesh Epic is the most notable literary product of Babylonia as yet discovered in the mounds of Mesopotamia. It recounts the exploits and adventures of a favorite hero, and in its final form covers twelve tablets, each tablet consisting of six columns (three on the obverse and three on the reverse) of about 50 lines for each column, or a total of about 3600 lines.

Of this total, however, barely more than one-half has been found among the remains of the great collect^ of cuneiform tablets gathered by King Ashurbanipal (668-626 B.C.) in his palace at Nineveh, and discovered by Layard in 1854 1 in the course of his excavations of the mound Kouyunjik (opposite Mosul).

The fragments of the epic painfully gathered chiefly by George Smith from the circa 30,000 tablets and bits of tablets brought to the British Museum were published in model form by Professor Paul Haupt; 2 and that edition still remains the primary source for our study of the Epic.

For the sake of convenience, we may call the form of the Epic in the fragments from the library of Ashurbanipal the Assyrian version, though like most of the literary productions in the library it not only reverts to a Babylonian original but represents a late copy of a much older original.
The absence of any reference to Assyria in the fragments recovered justifies us in assuming that the Assyrian version received its present form in Babylonia, perhaps in Erech; though it is of course possible that some of the late features, particularly the elaboration of the teachings of the theologians or schoolmen in the eleventh and twelfth tablets, may have been produced at least in part under the Assyrian influence.

Such teachings, reminding us of the leading thought in the Biblical Book of Ecclesiastes, 10 indicate the didactic character given to ancient tales that were of popular origin, that which were modified and elaborated under the influence of the schools^ which arose in connection with the Babylonian temples.
The story itself belongs, therefore, to a still earlier period than the form it received in this old Babylonian version.
Download An old Babylonian version of the Gilgamesh epic PDF ebook 5.6 MB.
Religions Sacred Texts
Next Post Previous Post
No Comment
Add Comment
comment url
History,Mythology,Mythology and Folklore,Religions,Sacred Texts