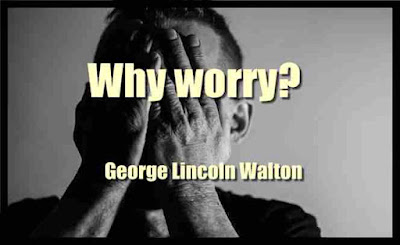 The first edition of "Why Worry?" appeared in 1908. Since it was my first venture into print for the eyes of the general public, it probably was not unnatural that I looked for the reviews with an anxious interest that marked me as a victim of the malady for which I had attempted to give counsel. My main fear was lest it is deemed frivolous.
The first review to meet my eyes that of a Boston paper set all fears upon this point at rest. It treated the book very seriously. It was likely, the reviewer said, to increase, rather than lessen, the sum total of the reader's worry, by calling attention to the many things to worry about, which might otherwise have escaped his notice!
If I had not steeled my heart against melancholy, this would have been a bitter blow. And even though I had, I cannot claim that it amused me.
This proved, happily, to be the last, as well as the first, unfavourable review brought to my notice. Nor has the event justified the prognosis. At least among the letters I have received, many of which speak gratefully of assistance rendered, none contain reproach. I take this opportunity to thank, in my turn, the many friends who have furthered the influence of the book by bringing it to the notice of those who need it.
I refer particularly to the physicians who have placed it on their waiting room tables, to say nothing of prescribing it.
Further experience has fortified the view that direct appeal only irritates the worrier, and that specific advice, however sound, is apt to be contemptuously disregarded by the very person becomes, as the result of some chance word, heard or read, an active apostle of the "don't worry" creed. It is with this in mind that I have played so many tunes upon a single string, not knowing which will be the one to rouse an answering chord in the consciousness of the reader.