The strength of being morally clean 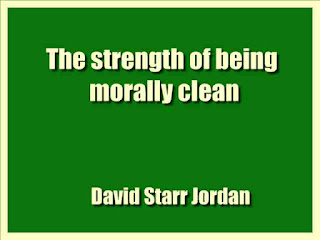 A study of the quest for unearned happiness

It is probably too much to say that all of the human misery can be traced to the dead-head habit. Misery has as many phases as humanity. But if we make this statement negatively, it will not be far from the truth. No one is ever miserable who would truly pay the price of happiness. No one is really miserable who has not tried to cheapen life.
the price which every good and perfect gift demands, we would somehow or other get out of paying. But we can never cheat the gods. Their choicest gifts lie not on the bargain counters. Our reward comes with our effort. It is part of the same process. In this matter, man gets what he deserves, meted out with the justice of eternity. In the sense in which I shall use these terms, sorrow and misery are not the same things.
They are not on speaking terms with each other. True sorrow, the pain of loss, is hallowed suffering. "Forever the other left," is a necessity in a world which each one must leave as he entered it, — alone. And we would not have it otherwise, for there is in the nature of things no other possibility. So long as we live we must take chances.
Sorrow is sacred. Misery is accursed. Sorrow springs from our relations to others. The misery we have all to ourselves. As real happiness is the glow that accompanies normal action, the reflex of the abundance of life, so is misery the shadow of dullness, the reflex of failing or morbid life. Misery is nature's protest against degeneration.
Human misery may be a symptom, a cause, or an effect. It is an expression of degeneration, and therefore a symptom of mental and spiritual decay. It is a cause of weakness and discouragement, and therefore of further degeneration and deeper misery. It is an effect of degeneration, and behind personal degeneration lies a multitude of causes.
None of its causes is simple. Some are subjective, the visible signs of a weak mind or mean spirit. Some are objective, the product of evil social conditions, to which the weak mind or mean spirit responds to its further injury. None of these can be removed by any single social panacea.
"The poor we have always with us," and there will always be those who shall show that "the way of the transgressor is hard." "The soul that sinneth it shall die," will not become a forgotten axiom so long as instability of will is a part of human nature.
When I was a boy I once had a primer that gave the names of many things which were good and many which were bad. Good things were faith,^hope, charity, piety, and integrity, while anger, selfishness and trickery were rightly put down as bad. But among the good things, the primer placed "adversity." This I could not understand, and to this day I remember how I was puzzled by it. The name "adversity" had a pretty sound, but I found that its meaning was the same as " bad luck." How can bad luck be a good thing?
Now that I have grown older and have watched men's lives and actions for many years, I can see how bad luck is really good. Good or bad is not in the thing itself, but in how we take it. If we yield and break down under it, it is not good; but neither are we good. It is not in the luck, but in ourselves, that the badness is. But if we take hold of bad luck bravely, manfully, we may change it into good luck, and when we do so we make ourselves.
Stronger for the next struggle. It was a fable of the Norsemen, that when a man won a victory over another, the strength of the conquered went over into his veins. This old fancy has its foundation in fact. Whoever has conquered fortune has luck on his side for the rest of his life. So adversity is good, if only we know how to take it. Shall we shrink under it, or shall we react against it?'
the book details : Download The strength of being morally clean - Size Less than 1 MB