The empresses of Rome 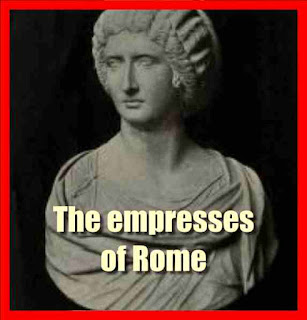 From the introduction
the story of Imperial Rome has been told frequently and impressively in our literature, and a few chapters in the long chronicle of man's deeds and failures have a more dramatic quality. Seven centuries before our era opens, when the greater part of Europe is still hidden under virgin forests or repellent swamps, and the decaying civilizations of the East cast, as they die, their seed upon the soil of Greece, we see, in the grey mist of the legendary period, a meagre people settling on one of the seven hills by the Tiber.

As it grows its enemies are driven back, and it spreads confidently over the neighbouring hills and down the connecting valleys. It gradually extends its rule over other Italian peoples, bracing its arm and improving its art in the long struggle.
It grows conscious of its larger power, and sends its legions eastward, over the blue sea, to gather the wealth and culture of Egypt, Assyria, Persia, and Greece; and westward and northward, over the white Alps, to sow the seed in Germany, Gaul, Britain, and Spain. A hundred years before the opening of the present era the tiny settlement on the Palatine has become the mistress of the world.
Its eagles cross the waters of the Danube and the Rhine, and glitter in the sun of Asia and Africa. But, with the wealth of the dying East, it has inherited the germs of a deadly malady. Rome, the heart of the giant frame, loses its vigour. The strong bronze limbs look pale and thin; the clear cold brain is overcast with the fumes of wine and heated with the thrills of sense; and Rome passes, decrepit and dishonoured, from the stage on which it has played so useful and fateful a part.


The fresh aspect of this familiar story that I propose to consider is the study of the women who moulded or marred the succeeding Emperors in their failure to arrest, if not their guilt in accelerating, the progress of Rome's disease. The woman had her part in the making, as well as^ the unmaking, of Rome. In the earlier days, when her work was confined within the walls of the home, no consul ever guided the momentous fortune of Rome, no soldier ever bore its eagles to the bounds of the world, but some woman had taught his lips to frame the syllables of his national creed.
However, long before the commencement of our era, the thought and the power of the Roman woman went out into the larger world of public life; and when the Empire is founded, when the control of the State's mighty resources is entrusted to the hands of a single ruler, the wife of the monarch may share his power, and assuredly shares his interest for us. Even as mere women * of Rome, as single figures and types rising to the luminous height of the throne out of the dark and indistinguishable crowd, they deserve to be passed in review.

Some such review we have, no doubt, in the two great works which spread the panorama of Imperial Rome before the eyes of English readers. In the graceful and restrained chapters of Merivale, we find the earlier Empresses delineated with no less charm than learning. In the more genial and voluptuous narrative of Gibbon, we may, at intervals, follow the fortunes and appreciate the character of the later Empresses.

But, no matter how nice a skill in grouping the historian may have, his stage is too crowded either for us to pick out the single character with proper distinctness, or for him to appraise it with entire accuracy. The fleeting glimpses of the Empresses which we catch, as the splendid panorama passes before us, must be blended in a fuller and steadier picture. The tramp and shock of armies, the wiles of statesmen, the social revolutions, which absorb the historian, must fall into the background, that the single figure may be seen in full contour. When this is done it will be found that there are many judgments on the Empresses, both in Merivale and Gibbon, which the biographer will venture to question.