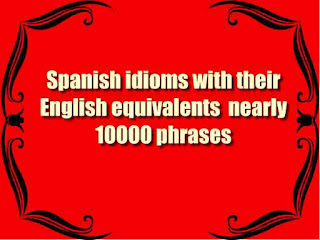 ENGLISH is the native tongue of one of the compilers of this collection of idioms, Spanish that of the other, and each of them is familiar with both languages. Only by such co-operation could results of any considerable value have been attained. An idiom is a phrase stamped by the usage of a language with a signification other than its grammatical or logical one.


Our effort has been to bring together as many of the idioms to be met within literary and conversational Spanish as possible, but not to include the technical phraseology of the professions and trades or mere vulgarisms. These lines are not always easy to draw. Nautical terms, for example, often appear in very light literature, most of which would certainly also be set down in a technical dictionary.

Many such may be found in the following pages. The more abstruse terminology of the law, on the other hand, seldom makes its way into belles-lettres or into the conversation and is excluded. The distinction between admissible slang, or homely phraseology, and downright vulgarisms is also far from sharp and depends more or less upon circumstances. We have omitted some phrases which, though they appear in literature, have no business there. Many of the idiomatic phrases are proverbs, but proverbs not containing idioms are excluded.

The method employed in the compilation was as follows: " El Novisimo Diccionario de la Lengua Castellana, por una Sociedad de Literates " (which is founded upon the Academy's Dictionary, with additions), and " El Nuevo Diccionario IngleVEspanol, y Espanol-Ingle's, por J. M. Lopez, E. R. Bensley, y Otros," were carefully read through from beginning to end, and the numerous idioms cited in illustration of the use of words were extracted. Much material has also been obtained from grammars, including those of Professors Alberto de Tornos, W. I. Knapp, H. M. Monsanto, and Louis A. Languellier, as well as from Bohn's Spanish


Proverbs. Don Quixote, in several editions and translations (including the late translation with a critical list of proverbs by John Ormsby, London, 1885), and Gil Bias have been carefully studied, and notes of idioms were made in reading many other works; finally, memoranda were kept of such as occurred in conversation during a period of two years.

These means cannot be exhaustive, but we believe that few common, important, or valuable phrases have escaped us. In rendering the idioms into English, the first object was to make their meaning intelligible; the second, to give equivalent English idioms where such could be found: in many cases, however, the pithiness of the original is best retained by a simple translation.


Renderings found in previous publications were adopted only when it seemed impossible to improve upon them, and it has been found necessary to correct many downright errors of translation. Our thanks are due to Commander Henry Glass, of the United States Navy, for examining and improving the translations of the nautical phrases.