Concise dictionary of the Korean language 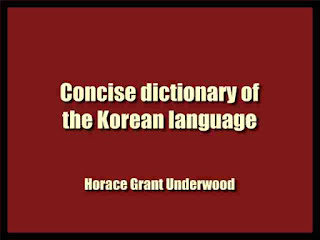 The absence of a dictionary of the Korean language in English makes the need for some such work apparent. It was with a full realization of this fact that the author after a few months of residence in the country, began the collection and systematic arrangement of Korean words with their English equivalents, now nearly five years ago. In the midst of other duties, but a small portion of time could be devoted to this work and in fact, it has not infrequently happened that for six months at a time it has been necessary to leave it entirely untouched.
For the most part, it has been left to summer vacations, when freedom from many other duties, left time to carry on this work. Con- sequent upon this, at the opening of last summer only some ten thousand words on either side had been classified and arranged with their synonyms

The Korean alphabet contains but twenty-five letters that can be learned by anyone in a day, no transliteration has been attempted. Not only is it unnecessary, but proves in most cases more of a hindrance than a help. The learning of the alphabet is simple, the various sounds represented by each letter can soon be acquired, and while a Romanization of the words, following not the writing but the sounds might in many cases be a help, it is far better for the student to acquire the pronunciation for himself. With reference to definitions, great care has been exercised to obtain accuracy, to give the word neither too broad a definition nor to restrict it too narrowly.
Words of Chinese derivation, have been careful, compared with their corresponding terms in “ William’s Syllabic Dictionary of the Chinese Language ” and most words of purely Korean origin have been critically examined and tested in every conceivable way so that no shade of meaning or method of use should by any chance be lost sight of. T
The necessity of this becomes apparent upon the first attempt to obtain the simplest definition from a Korean teacher. To the work of the French missionaries in their • admirable dictionary, the author takes pleasure in acknowledging the assistance derived, especially in the Korean-English part, although he differs from them in so many points, both as to orthography and definition.,
For convenience in handling, and in accordance with the primary idea of the book it is issued in two volumes, but as there is as yet no other English dictionary of the Korean language, another or Student edition is issued at the same time; the only difference being that the Student Edition is in one volume with margins, while the pocket edition is in two volumes without margins.
Hoping that the book may be helpful and meet a long-felt want, it is now humbly offered to the students of Korean.
Author: Horace Grant Underwood
.publication Date:1890