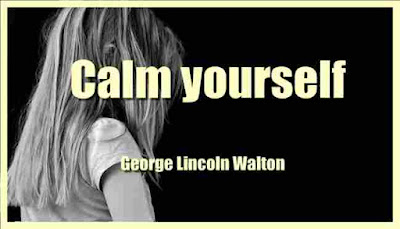 Speaking as a neurologist, it is this: In my belief, nervous prostration would be rare if we were so constituted that we could leave out needless fear and fret, avoid swearing or even feeling like swearing if we could argue without acrimony, could stifle our aversions, could resist the temptation to play the martyr, and could listen to criticism and ridicule without getting " hot under the collar." And, further, I believe that if such a millennium could be attained, the actual amount of effective work in the world would be easily doubled.

Not that people would not get tired, but it would be a healthy tired, the kinda normal child has after a long day's play; not the kind of tired that puts you where you can't sleep if a clock ticks, but the kind that makes you relax every muscle in your body and sleep until the breakfast bell rings, or if you don't sleep, makes you lie still in one position and think what a good time you are having, instead of churning the bedclothes and fussing about that eight hours' sleep on which you had set your mind. Unfortunately, we are not by nature so endowed that we can expect, without effort, to adopt the poise that insures such slumber, nor is it likely that the laws of heredity will be so far subverted that our descendants will be so constituted, unless by infusion of dominant blood of another colour than ours.

If we should set about learning to sail a boat, this is one of the first things we should do, but we pay very little attention to learning how to run ourselves. On this point, Epictetus says, " Cease to make yourselves slaves. Is there not some advantage to be gained from this man? From all: even a reviler. Does not the wrestler gain advantage from him with whom he exercises before the combat? The greatest. And just in the same manner I can exercise myself with this man — and the heavier he is the better for me, and it is surely an advantage to me when I am exercised in the gentleness of temper. This is knowing how to gain an advantage from men."

Is it not worthwhile to try and approximate, if we cannot hope to attain, the ideal of fretless, fussless, and unworrying poise?
A friend to whom I recently propounded this question promptly answered, "No. If everybody was like that it would be a very tiresome world." But I have a fancy that if such equanimity could be achieved there would still be enough variety left in life to make up for missing the fun of being timid and of getting mad. Another friend says that nervous prostration could not be so easily disposed of. He says he frets because he is tired. In point of fact, I think the principal reason he gets so tired is that he frets. But I did not tell him so for fear of an explosion. The effect of psychotherapy on the man who is not anxious to be psychotherapy is like that of water on parched earth.
If you let it lie it may percolate, but there is no use trying to rub it in! And even suppose a person is tired, much of the consequent fret is a mere obsession or fixed idea. What I mean is this: The association " tired and cross " has become so fixed in our minds that to separate them would do violence to our ideas of the proprieties. But just try the experiment once, as I have else- were suggested, of going home after a hard day's work, saying to yourself,  tired and cross; why not tired and good-natured?" You will find it a good deal easier than you think to carry out the suggestion, and the chances are you will give your family a surprise party.
Or better yet, at the outset of your day, try this experiment: Start out with the de- termination that you will do each piece of work in its turn without an unnecessary fret, without burdening your mind with such questions as whether So-and-So will keep his appointment, whether So-and-So will pay his bill, whether So-and-So will understand your motives, and whether your business is all gone and will never come back again for the thousandth time.
Try the experiment of limiting your thoughts to the task in hand, dismissing the one just finished and leaving the next one to take its turn. When you have entrusted someone else with a part of your work, dismiss that part from your mind and, most important of all, hold yourself in readiness to react comfortably instead of irritably to the ordinary incidents of life. If you succeed in doing this 3^ou will be surprised to find yourself comparatively fresh at the end of a hard day's work, and I venture to predict, meantime, that your affairs will not suffer.