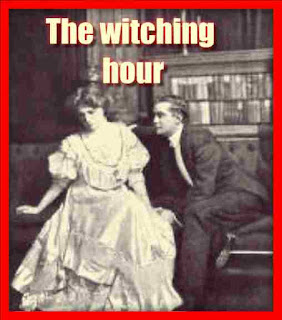 Plot Summary
Witching Hour,  by Augustus M. Thomas (1907). Jack Brookfield, a professional gambler, in whose rooms the play opens, is believed by his friends to be possessed of an extraordinary personal magnetism. It is said that this gift is shared by his sister, Mrs Campbell and her daughter Viola. The interior decorations of Brookfield’s magnificent house have been planned by Clay Whipple, who is in love with Viola.
Except:
The audience that filled Macauley's Theatre was 1 one of the most intellectual and fashionable that Louisville had ever seen. The lighter operas were not uncommon, but Wagner was a curiosity if not yet a fad, and both the curious and the devoted were in attendance.
The curtain had gone up on the final act. Jack Brookfield was leaning against the back wall of the auditorium. He was watching the occupants of the proscenium-box just over the drummer more especially the man and the boy and girl who occupied the three chairs in the back of the box. Besides Brookfield himself, these three were perhaps the only persons not intent upon the scene on the stage. Brookfield could see, as he watched her through his glasses, that his niece the girl in the box was annoyed.
He knew her temperament well enough to interpret accurately the sudden frown, the spasmodic twitching at one corner of the shapely mouth. He also knew well enough the man who was breathing.