The Stoics by Harry Sandbach 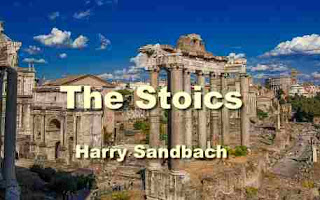 Excerpt
In the ancient world of the Greeks and the Romans, the words 'philosophy' and 'philosopher' carried different suggestions from those they have today. Literally, they mean love of Wisdom', 'lover of wisdom, and understanding anything at all may be part of wisdom.
Therefore the ancient philosopher might venture into fields that are today occupied by specialists, astronomers, meteorologists, literary critics, social scientists, and so on. To speak in general terms, they had an insufficient appreciation of the value of experiment and patient observation; a priori reasoning and .inference from a few supposed facts were basis enough for explaining the subject in hand.
To say this is not to condemn this 'philosophical' activity as useless. like most of Aristotle's meteorology, but others were steps in the right direction, like Demooritus' atomic theory. Intuitive guesswork has always been one of the methods by which knowledge has advanced. Too often, however, the ancients did not know how to test their guesses, or even that they needed testing.
The modem philosopher agrees with the ancient that ethics belongs to him. But there is a difference. C. D. Broad suggested that a study of ethics would do as little good to a man's conduct as a study of dynamics would to his performance on the golf- links {Five Types of Ethical Theory p. 285). Not all philosophers of today would hold such an extreme position, but it is the opposite of that which was all but universal in the ancient world. We study ethics, said Aristotle, not in order to know what goodness is but in order to become good {Nicomachean Ethics 1103 b.27).
The ancient philosopher, unless he was a skeptic and on principle refused to commit himself, was convinced that ethics had practical consequences; he also held that whatever other subjects he might study, this was the one of first importance. No wisdom could have a higher value than a knowledge of how to live and behave.
Some thinkers may have found a more attractive challenge in non-ethical problems, but none could leave ethics aside, the more so because Greek religion, and even more Roman, failed to give adequate guidance.
It was largely a matter of ritual, and although not devoid of moral influence, did not offer any coherent set of reasons for the behaviour is encouraged. If anyone person can be credited with being the cause of this primacy of ethics, it is Socrates, an Athenian of the later fifth-century bg, who exerted a fascination on following generations that is not exhausted even today.
He left no writings, but his memory was preserved in the dialogues composed by those who had known him and who made him a character in their works. The figure that appears is of a man who was overwhelmingly interested in discovering the key to right conduct, who by questioning diose whom he met forced them to recognize the in- adequacy and inconsistency of their thinking on morality, and who hoped to find the answer to his problems by defining the terms of ethical vocabulary, virtue, bravery, justice, and so on.
He believed that if one could only know what is good, one could not help but do it; no one was willingly bad, and badness was the result of not knowing what was good. He did not himself claim to have this knowledge; he was only a lover of wisdom {phiiosophos), not a wise man (Sophos). But he attracted a number of younger men who found intellectual excitement in hear- ing him discuss, or discussing with him, these problems.
Their attachment was increased when in 399 bc he was prosecuted and condemned to death on a charge of 'not recognizing the gods recognized by the state, introducing new divinities, and corrupting the young.
The prosecutors no doubt though that the stability of society was threatened by his influence, which encouraged young men to question traditional assumptions; several of his friends had emphasized the faults of democracy as practised at Athens, and among them, the brilliant Critias had in particularly excited hatred as leader of the 'Thirty Tyrants', dictators who after Athens' defeat in the Peloponnesian War had with Spartan aid seized power and bloodily maintained it for more than a year.

Introduction - The Founder -The System: Ethics - The System: Natural Science -The System: Logic - Fate and Free Will, Providence and Evil- Personalities of the Earlier Stoa - Innovation: Panaetius and Posidonius - Stoics and Politics - The Later Stoics