The evolution of the idea of God 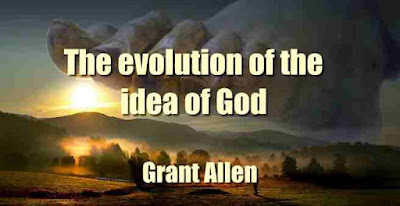 An inquiry into the origins of religion

Two main schools of thinking exist in our midst at the present day: the school of humanists and the school of animists. This work is to some extent an attempt to reconcile them. It contains, I believe, the first extended effort that has yet been made to trace the genesis of the belief in a God from its earliest origin in the mind of primitive man up to its fullest development in advanced and etherealized Christian theology.
My method is therefore constructive, not destructive. Instead of setting out to argue away or demolish a deep-seated and ancestral element in our complex nature, this book merely posits for itself the psychological question, " By what successive steps did men come to frame for themselves the conception of a deity ? " — or, if the reader so prefers it, " How did we arrive at our knowledge of God?

It seeks provisionally to answer these profound and important questions by reference to the earliest beliefs of savages, past or present, and to the testimony of historical documents and ancient monuments. It does not concern itself at all with the validity or invalidity of the ideas in themselves; it does but endeavours to show how inevitable they were, and how man's relationship with the external universe was certain a priori to beget them as of necessity.

In so vast a synthesis, it would be absurd to pretend at the present day that one approached one's subject entirely de novo. Every enquirer must needs depend much upon the various researches of his predecessors in various

parts of his field of inquiry. The problem before us divides itself into three main portions: first, how did men come to believe in many gods — the origin of polytheism; second, how, by the elimination of most of these gods, did certain races of men come to believe in one single supreme and omnipotent God — the origin of monotheism; third how, having arrived at that concept, did the most advanced races and civilizations come to conceive of that God as Triune, and to identify one of his Persons with a particular divine and human incarnation — the origin of Christianity. In considering each of these three main problems I have been greatly guided and assisted by three previous enquirers or sets of enquirers.

As to the origin of polytheism, I have adopted in the main Mr Herbert Spencer's remarkable ghost theory, though with certain important modifications and additions. In this part of my work, I have also been largely aided by materials derived from Mr Duff IMacdonald, the able author of Africana, from Mr Turner, the well-known Samoan missionary, and from several other writers, supplemented as they are by my own researches among the works of explorers and ethnologists in general. On the whole, I have here accepted the theory which traces the origin of the belief in gods to primaeval ancestor worship, or rather corpse worship, as against the rival theory which traces its origin to supposed primitive animism.

I, Christianity as a Religious Standard i
II. Religion and Mythology 20
III. The Life of the Dead 42
IV. The Origin of Gods 68
V. Sacred Stones 93
VI. Sacred Stakes I27
VII. Sacred Trees I38
VIII. The Gods of Egypt 154
IX. The Gods of Israel l8 °
X. The Rise of Monotheism 204
XI. Human Gods 225
XII. The Manufacture of Gods 2 47
XIII. Gods of Cultivation 272
XIV. Corn- and Wine-Gods 301
XV. Sacrifice and Sacrament 318
XVI. The Doctrine of the Atonement 347
XVII. The World before Christ 362
XVIII. The Growth of Christianity 378
'^XIX. Survivals in Christendom 409
XX. Conclusion 434
Charles Grant Blairfindie Allen was a Canadian science writer and novelist, educated in England. He was a public promoter of evolution in the second half of the nineteenth century